I had planned some dinosaur activities to tie into a new exhibition at the Centre for Life, but both boys were scared and didn't want to even think about it so I had to improvise and we used Tyrannosaurus Drip as our literature-based study instead!

Amazon.co.uk
Everyone knows that tyrannosauruses are big and scary, so when a placid duckbill dinosaur's egg ends up in the wrong nest confusion is sure to ensue! When the baby dinosaur hatches out, he's so out of place that his grisly big sisters call him Tyrannosaurus Drip. Poor little Drip: all he wants is a quiet life munching on water weed . . . 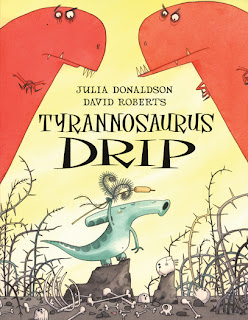 We looked through the book to identify differences and similarities between the two groups of dinosaurs. We recorded them on this sheet. 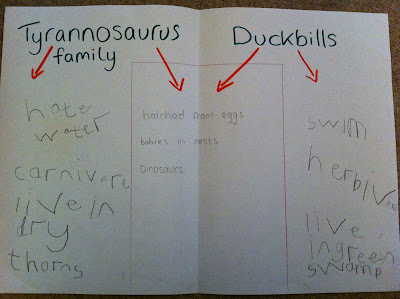 We listened to the T-Drip song on the Gruffalo website and talked afterwards about being different and finding things and people you like, which is the basis for the song.

I asked Harry which other stories he knew that used the theme of reflection. I was impressed when he thought of one - The Ugly Duckling. There is also an Indian folk tale we have read recently about a proud lion who falls into a well chasing away another lion (actually his own reflection). We talked about themes and how several different stories may still have the same themes. Harry and Peter have been practising making scary faces reflected in the bath water this week too!

We made a giant dinosaur collage. We looked at some 'dinosaur landscape' images online to give us an idea of the kind of colour we needed and what to include. Harry and Peter painted some paper with blue for the sky and a stone-brown colour for the ground. 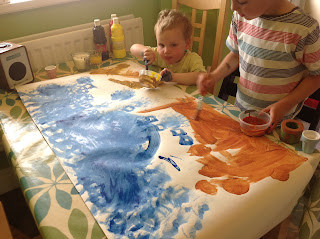 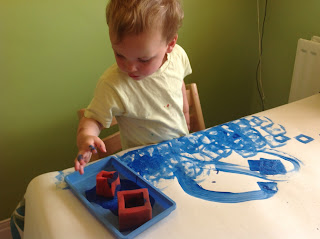 Harry cut out some black and red foam for volcanoes and some blue foam for a lake. We had already decorated some dinosaur shapes with friends recently so we added them to the collage, plus some dinosaur stickers. We talked about perspective and how the smaller dinosaur stickers could be smaller because they are further away. We used white felt for clouds and green tissue paper for reeds around the lake. 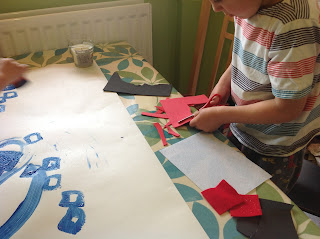 The finished article is up on the wall at the moment. 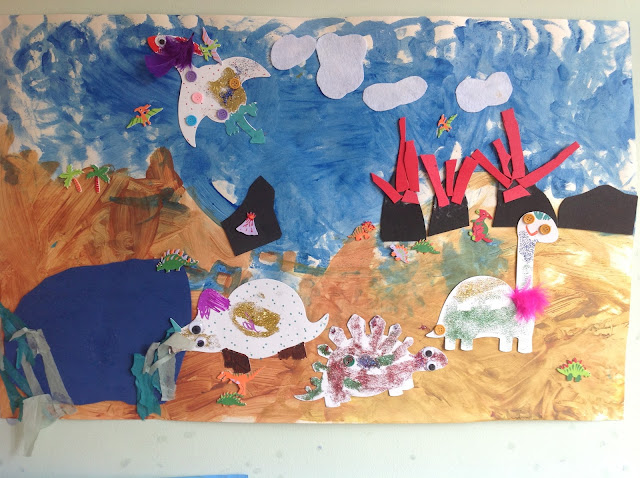 We talked about adjectives and I asked Harry to describe the collage and his favourite dinosaur to me, using as much descriptive language as possible. He needed a couple of prompts to describe elements in deeper detail but this is what he came up with

There are big and small dinosaurs, stomping, running, flying and walking. There is a volcano. Lava shoots out of it. The lava is very hot and red. Two dinosaurs are drinking at the edge of the pond. The sky is blue with white clouds. The ground is rocky.

My favourite dinosaur is triceratops. He has spiky horns and can charge very fast. He is brown and very heavy. This triceratops is grumpy and makes grunting noises.
Posted by Hayley at 20:33