Harry received his first set of Top Trumps cards for his birthday - they are fantastic - why haven't I played with these!? Stuart said he remembers them from his childhood but I don't. He has the dinosaur set and we have played a few times today. 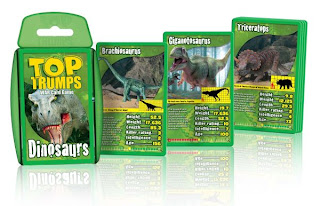 If anyone is not familiar with the game, there are lots of cards, each of which shows one dinosaur with a description and list of facts - height, weight, length, killer rating, intelligence and age. You choose a fact from your top card and read it aloud to the other player, who has to read the corresponding fact from their card. Whoever has the highest score 'trumps' and wins both cards.

Since playing today, Harry can recognise numbers in thousands, has been recognising and stating decimal places correctly and can read the words used in the fact list. Also, for example, he has to recognise that 3,500 is bigger than 2,800 to know who has won the card. He will start to recognise that 3,500 is a big number in the context of the rest of the cards in the game, so that this is a good fact to use on your turn to give you a chance to trump the other player.
Posted by Hayley at 20:58

Email ThisBlogThis!Share to TwitterShare to FacebookShare to Pinterest
Labels: numeracy