Harry seems to be making good progress at the moment and things are going well so I had better get it all on here before this phase moves on!

He is reading voluntarily this week and seems keen to earn his star stickers, which I suspect is due to the financial reward which he is saving towards Lego! He gets a star each time he reads to me, whether this is his choice or my request and when he has 20 he gets £5 for his money box. He even took over reading most of a Mr Men book I had started the other day.

He is also doing lots of writing as part of games and has been writing much more willingly (and quickly and neatly) in recent birthday cards when I have asked him. I think it helps that I now just about trust Peter enough to leave pens and pencils out around the house so Harry can just pick them up as part of what he is doing. Previously we only used them in the kitchen as Peter was keen on wall graffiti! 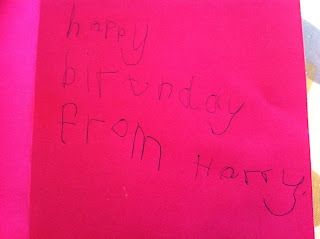 Harry's swimming lessons are going well - he is really happy and smiling through most of it. He put his face in the water this week, which would have been unthinkable a few months ago!

Harry is going to continue music in September by learning either violin or cello at The Sage. He is really looking forward to progressing to an instrument so it will be interesting to see if he takes to it and wants to put in the practice. We are also going to join him into the children's choir to see if he enjoys it. We will be at The Sage all Saturday morning for his class in any case and the choir will take place afterwards.
Posted by Hayley at 08:18