Today has been a fairly typical day at home and the boys have been very busy! I love this kind of day. It usually ends with quite a messy house and a tired me, but it also involves great amounts of self-directed natural learning. This kind of play is so valuable and I love seeing how much they absorb from it while having fun. There was an article recently (here) about the benefits of children starting school later than the current age and I am definitely a supporter of this. Today there has not been a workbook or a desk in sight, nor have I been trying to teach anything but we have covered several curriculum topics through play, discussion and Harry's own initiative, we have been out engaging with the real world and how it works and Harry has done sport with friends.

Peter has been a little addicted to TV recently now he has worked out how to turn it on himself, so today I turned it off at the plug and told him it was broken. He accepted that and didn't try again. I don't find TV overload is conducive to learning in our house, although around an hour a day seems not to cause any problems.

We built part of the Lego mine, a Duplo zoo and some mine trucks to play robbery games using the Lego police station. Harry used the space shuttle as a special police spy plane with a thermal camera to find hiding robbers. Peter played too and joined in really well. He usually does try but needs my input to help him understand what he needs to do and to try not to break anything! 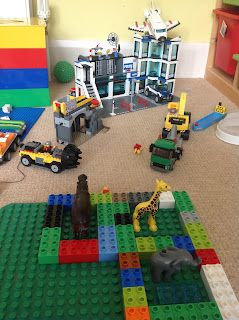 Harry made a rainbow with the scarves before he and Peter pretended to be storm clouds blowing the sun and the rainbow away. 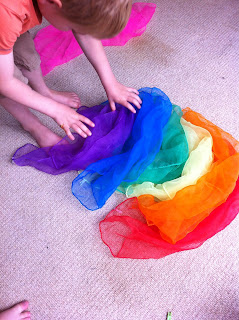 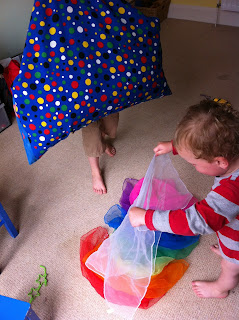 We printed off some new colouring sheets and these great wheel sheets from Activity Village, which Harry used to design his own cars and trucks. We also had a go at drawing the Angel of The North after our visit on Tuesday. 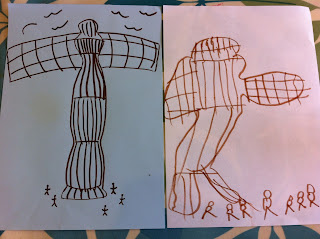 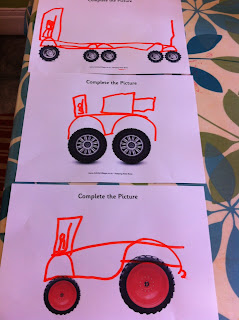 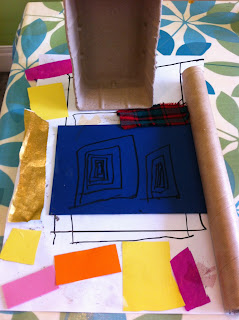 Harry and Peter dressed up in lots of warm outdoor clothes and went on an 'Arctic expedition' to do scientific research (not sure how long Peter's bare legs and feet would cope in the Arctic!). They collected sticks and stones from the garden and took to the 'research lab' (also known as the playhouse) to look closely at them! 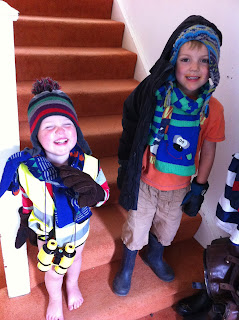 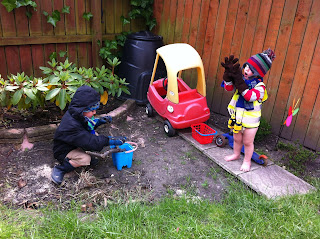 Harry did a reading eggs lesson while Peter had a nap then played some games on the reading eggs website. This afternoon we went on the bus to town to post a birthday present and we popped into the library to return some books and ended up reading several while we were there. Harry asked for what we needed at the post office and paid. We then got a bus to Harry's enjoy-a-ball class as we haven't had the car today. Finally, we got home for tea and the TV seemed to be fixed :-).
Posted by Hayley at 23:10