Harry was really keen to play shops again this morning so we did that first. He is now playing at being a ticket machine - we ask for the number of tickets we need, he sends them through a hole in a box with a slip of paper showing the price. We then send the money through the hole and any change comes back out. This adds an extra numeracy task as he is writing the numbers for the price too. He has been choosing numbers up to 20 for the cost and I pay with a 10p or 20p so he can give change as he likes doing that.

I had a look through our workbooks for activities to support this last night and he did these this morning too. There was some adding and subtracting to 20 and an adding grid, showing pairs of numbers that make 20. He is keeping this with his ticket machine area as he said it will help him work out the change when I pay with 20p. 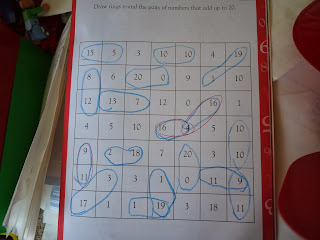 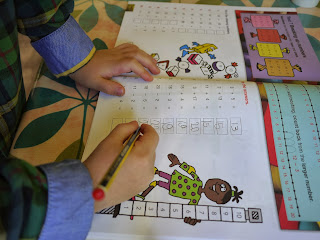 We went to our French class this afternoon - we have been doing this for over a year now so it is a nice constant in our week. We went to the playground with our friends afterwards.

Harry was very excited after getting out of the bath as I told him to put clothes back on instead of pyjamas and he went out with Stuart when he got home to collect his new bike! They had been to buy it last weekend and it was ready yesterday. We hadn't told him in advance as Stuart could easily have been too late from work and the shop closed at 7pm but they made it. He rode it up and down the street a few times and I have promised a proper ride out tomorrow morning - he needs to get the hang of using gears as he hasn't had them before. He was so happy and said he never wants to be away from it! 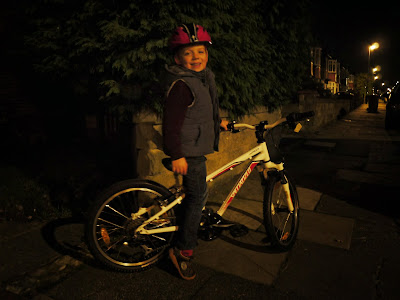