My aim with purposeful play is to introduce and cement concepts such as colours, numeracy (including concepts of number, size, weight, shape etc) and letters through focused play and also to extend vocabulary by talking about what we are doing and using lots of descriptive words.

Peter obviously takes part in lots of activities outside specific purposeful play, so the amount of focused play activity I do with him depends on what else we have been doing. He joins in with craft and cooking at home and comes on all our trips out, as well as directing his own play, playing with Harry, playing out in the garden and taking part in under-5's music group at The Sage.

Peter chose a bag of new marbles at Hamley's in London and has been very interested in them, so it was natural to use these for some extended activities.

I asked him to find the biggest and smallest ones from a selection. We talked about some features of the marbles while holding them - smooth, heavy and shiny. 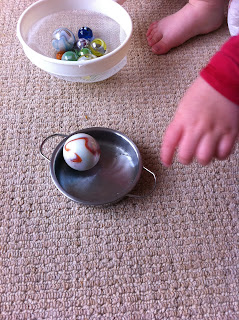 I gave him a big metal bowl to hear the noisy sound the marbles made inside. He liked making a big crash by rolling them out of a tube into the bowl. 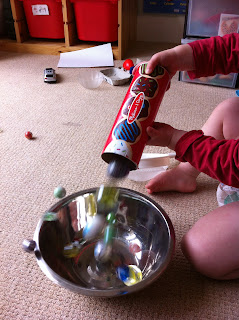 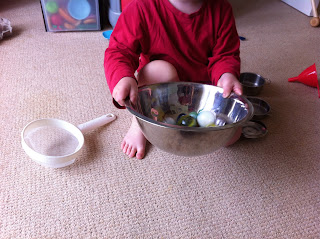 He rolled them into my hand from the tube too and we lined them up and counted them a few times. We talked about the different colours. He likes the 'football' one and the 'tiger' one with orange and brown stripes. 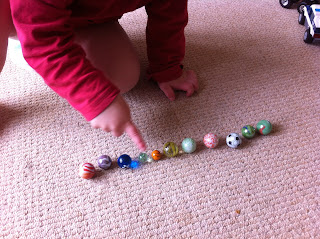 I had seen this idea on The Imagination Tree website (I often browse here for craft inspiration) and prepared the egg box in advance by painting the inside with acrylic paint. I gave Peter a tray of pom poms and asked him to put the pom poms in the correct colour hole. When he had done that we got them out again and counted them in rows. We talked about big and small and compared the biggest and smallest. I also then gave him some Lego pieces and he sorted those too. I left this out on the playroom table and he has gone back to it several times to put the pom poms in the holes again. 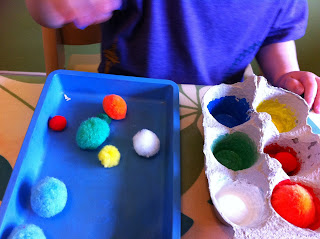 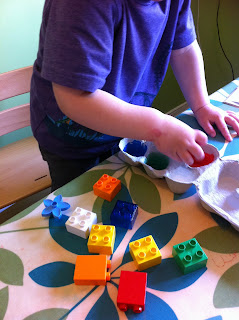 Some of the purposeful play type activities I do with Peter are planned and some come about naturally, like this water based one. He had come into the garden while I was hanging washing out and started playing with the rain water in the water table. I gave him a bowl and a stick and asked if they would float. He tried them and they did - he said the bowl was a boat. He then picked up a big bucket to see if that would float too! 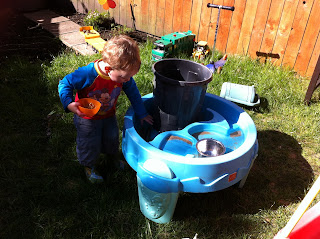