As it was a warm afternoon yesterday we did an activity I have had ready for a while based on the science of floating and sinking.

We read this book from the library first (Harry also read a page to me) and I gave Harry and Peter a selection of objects and a tub of water. We used a plastic spoon, a metal spoon, a cork, coins, marbles, shallow plastic tubs, wooden sticks and an orange. I really liked the book and I am going to look out for the other titles. It had a good combination of explanation and practical activities.

Harry guessed that the metal objects, the marbles and the orange would sink as they are heavy. He loved the fact that the orange floated! This was explained in the book but I skipped that page until after the activity so he could see it. We then peeled the orange and tried again and it sank. The orange skin traps a layer of air which helped it to float pre-peeling. 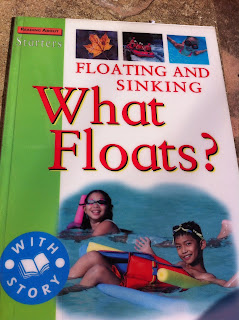 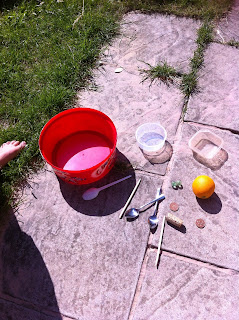 The plastic spoon and plastic pots floated until filled with water then they sank. 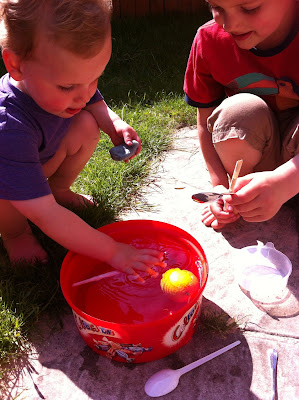 The boys played with more water for another hour in the garden and when they came back in for tea we read the book again and talked about what we learned.

- Air helps things to float, such as the air inside an orange, a life jacket or a rubber ring.

- The shape of an object can help it to float, such as a boat or the plastic pots.
Posted by Hayley at 21:37