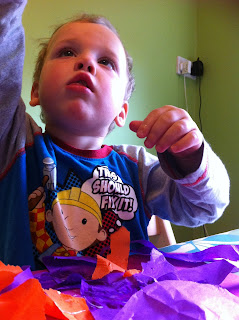 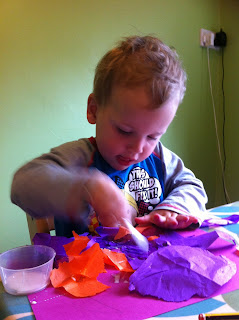 These play activities cover a few weeks as we had three trips out last week plus a museum workshop and French class so there wasn't much time for home-based activity!

While Harry did some Roman craft I gave Peter tissue paper and pva glue. He ripped the tissue paper himself (good fine motor practice) and glued it to paper. We talked about the colours as he did it and he was really engrossed for half an hour. He loved holding up the glue spreader and seeing the glue fall to the paper.
I have started using these alphabet colouring pages from Activity Village with Peter. We have just used 'A' so far and he pointed to the objects and named some of them while colouring them. I pointed them out too and emphasised the A sound. 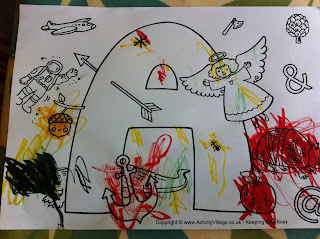 We have been getting a lot of our Orchard Toys games out again recently. I love playing board games with both boys and they both mainly play really nicely, taking turns and follow it through to the end. We played Spotty Dogs and Peter liked spinning the spinner and we counted the dots and bones together. We will use games a lot over the next couple of years as we did with Harry and we also play with all of us together sometimes - Spotty Dogs and Ladybirds are both great for early counting. 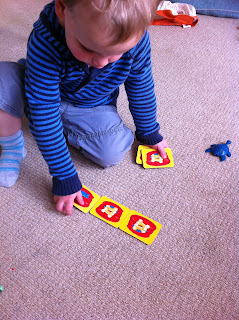 We also played Red Dog, Blue Dog, a lotto game. I asked Peter which colour his object was each time he chose a card and he mostly gets it right now. 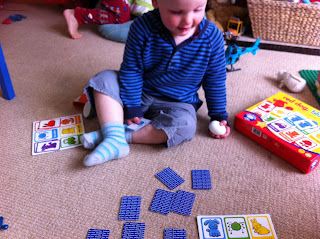 I have been using these books from the library for counting. We read them while Harry was doing his gymnastics class. We also talked lots about the pictures on the pages and the colours, as well as counting the objects. 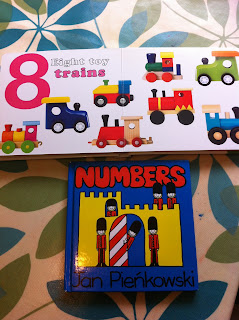 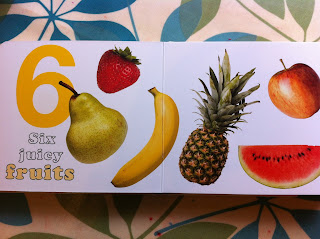 There is a room in the building where Harry does his enjoy-a-ball class which stores the playgroup toys and we go in there sometimes to wait, which is where we found these great magnets. Peter made them into 'snakes' and he made a long one for daddy and a short one for baby, so we talked about long and short while he was making them. He also made flowers and we talked lots about the colours he was using while he did it. This was such a great learning activity for concepts of colour and size and he remembered when we went back this week and asked to go and make snakes! 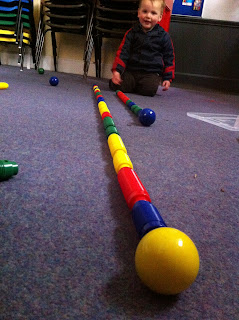 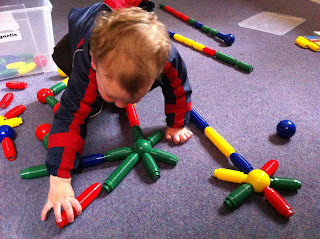