Shape activities, box of the world, baking and playdough

We have spent the whole day at home today. We usually have French on a Thursday but Stuart needed the car at the last minute today so we couldn't go. We have done lots of French counting and sung heads,shoulders, knees and toes in French several times - Peter finds this hilarious for some reason, maybe it's my singing! We rarely spend the whole day at home and enjoy it when we do as there is plenty of time for cooking, craft and anything else that the boys request to do.

We started today with some shape activities. Last night I drew shapes onto 18 pieces of card and hid them around the playroom. I asked Harry and Peter to find them all this morning (they love hunting for things!) and then we had a look at them and talked about the names. I read them Wilf's Shapes (a Biff, Chip and Kipper book I got at The Works) and asked them to take out and put back particular shapes from our shape puzzles. Harry completed the shape page from the maths workbook we are finishing. 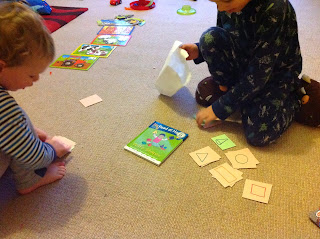 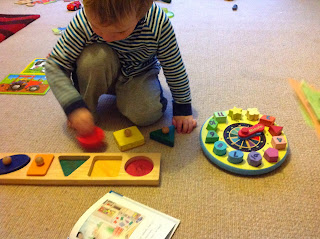 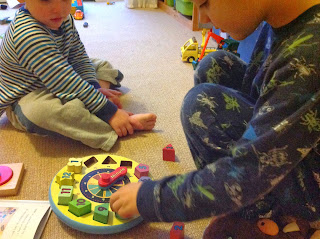 We also played shape lotto. I made this by cutting shapes from different coloured and textured paper. One set was stuck to the board and one set used as the cards to match up to the pictures on the board. 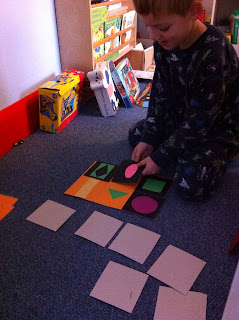 We played matching pairs with 3D shapes, which I also had drawn onto cards and laminated. 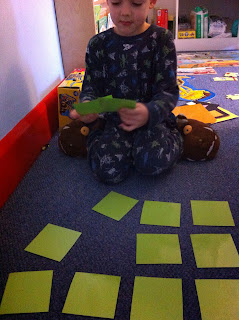 Harry and Peter then went off to collect different shapes from around the house. Here they are with their collection! 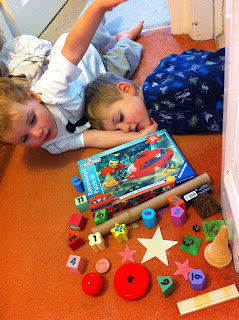 We also had a look at items my mum brought us back from her USA holiday in September. Harry really liked the dollar notes and coins so we talked about different currencies and looked at the images. One of the bills featured Abraham Lincoln so we also talked about the American Civil War and the abolition of slavery and I read him the Lincoln section from our Library of The Presidents book my mum had also brought. Stuart and I recently watched the film, Lincoln, so I remembered the facts from there! He also liked looking at the map of Central Park as this features in an audio book he has borrowed several times from the library - Grk and The Hot Dog Trail, which is set in New York.

We already had a few souvenirs and postcards people had brought us back from holidays and I found a good storage bag with world images at Paperchase. I have called this our Box of The World. The boys really like getting it out and playing with the bits inside while I talk to them about it and they seem to absorb lots of facts too. We now have New York, Niagara Falls, Egypt and Paris. 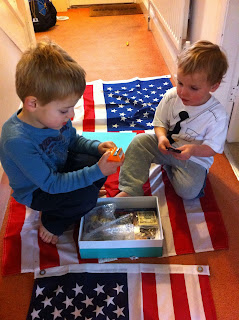 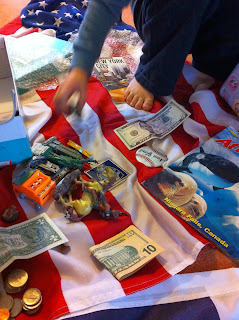 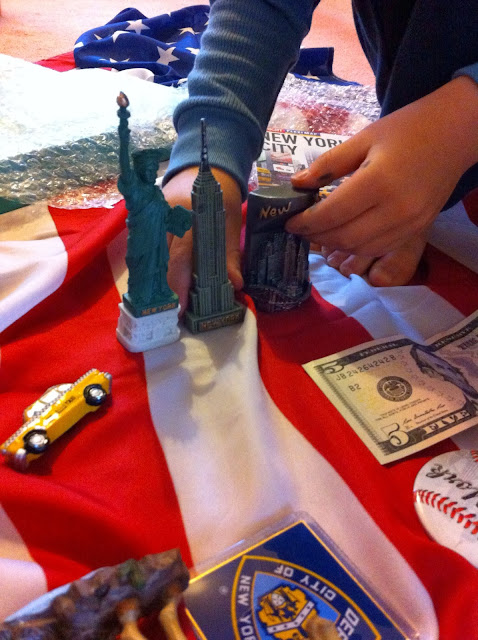 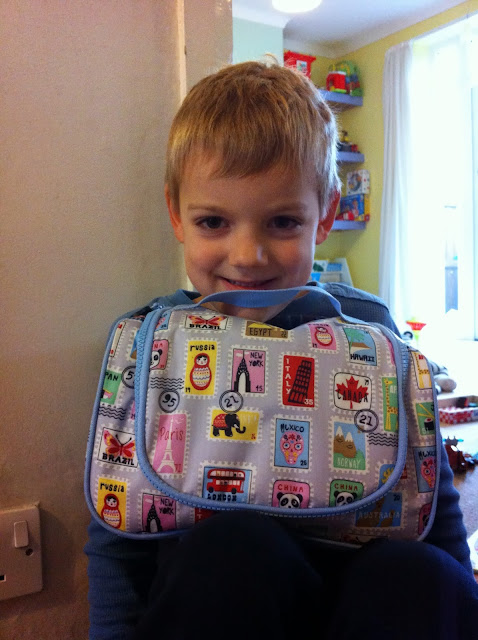 I made some new playdough today and Peter added stones, dinosaurs and pasta. Harry made cakes with pasta candles. They played with this for over an hour while I made gingerbread biscuit dough to keep in the fridge for later. 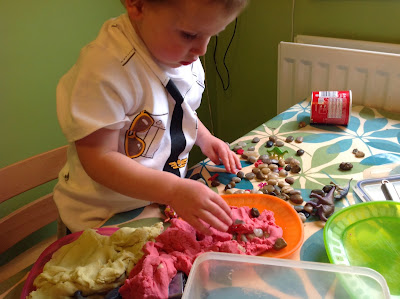 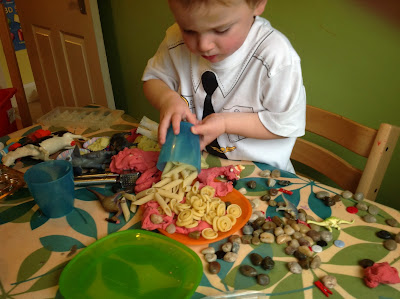 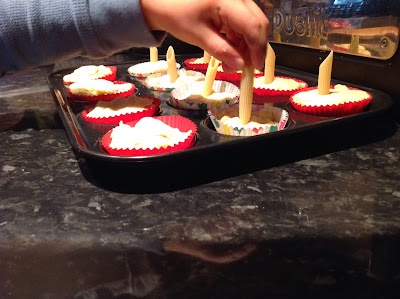 Peter had a nap after lunch, he has a cold and has needed a catch up of sleep all week. Harry and I did Hama beads together and he did his cello practise. We also built a marble run when Peter woke up. Harry sorted all the pieces into colours and then into 2's, declaring that we had an even number as they all went into pairs. 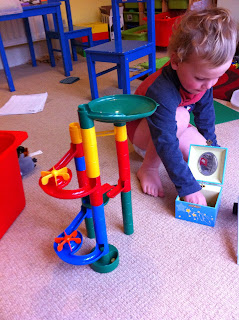 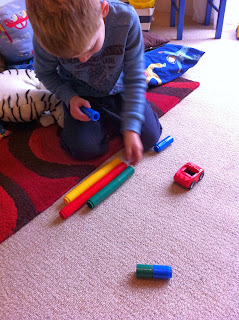 We also had a game of Spotty Dogs. Peter is just starting to manage the games requiring counting. Orchard Toys games helped Harry lots when he was learning to count, we love them! 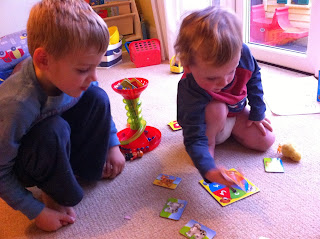 We made gingerbread men and fat rascals. I have never made these before, only bought them from Betty's in Harrogate - the home-made ones were different but delicious! 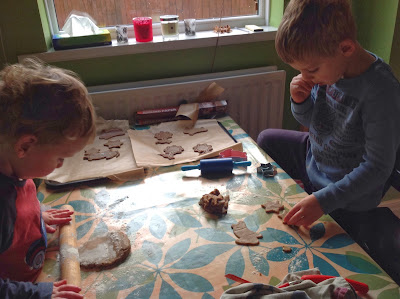 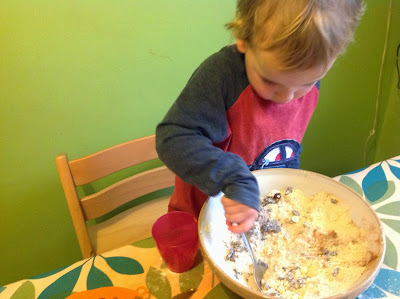 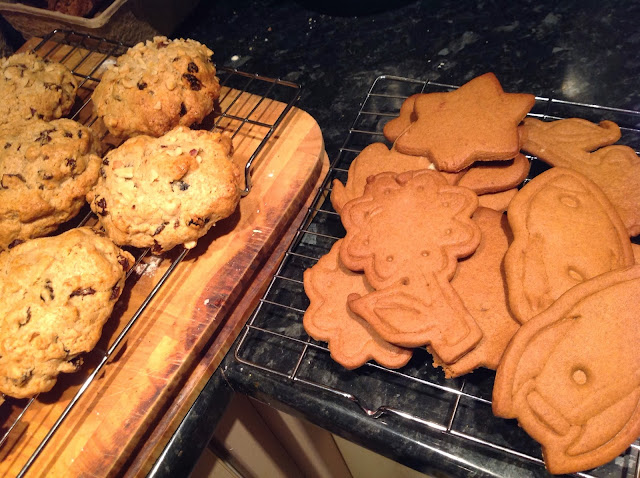