It's been lovely and productive today. I finally feel like I know what day it is again after a busy seven days over Christmas. We will be getting back into our routine this week which is quite easy as we don't have formal lesson times and I try to incorporate the learning activities I want to cover into our everyday life and around the activities Harry wants to do. The maths games below were played at 7.30am this morning, in pyjamas, as the boys were keen to do them and they will never be more awake and alert!
We played a new place value/addition maths game from the great Games for Learning book. I set up some score sheets with a three digit addition sum. We took turns to draw a card from a deck of playing cards (tens, picture cards and jokers removed) and recorded the number in our boxes. When we had each drawn six cards we added together our three digit numbers to get our score. We added the units, tens and hundreds separately. My total was greater than 1,000 so this was a good introduction to place value of thousands and it also required carrying 10 from the units to the tens column. Harry seemed to understand this concept fine. This game can be used for larger numbers, adding more than two numbers together and other maths functions so we will be playing it a lot. 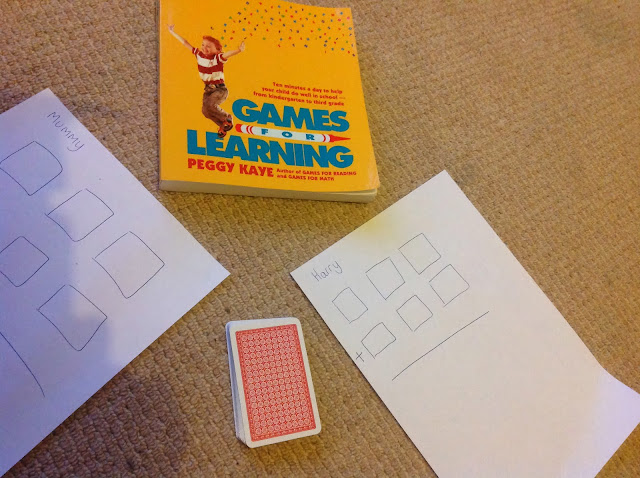 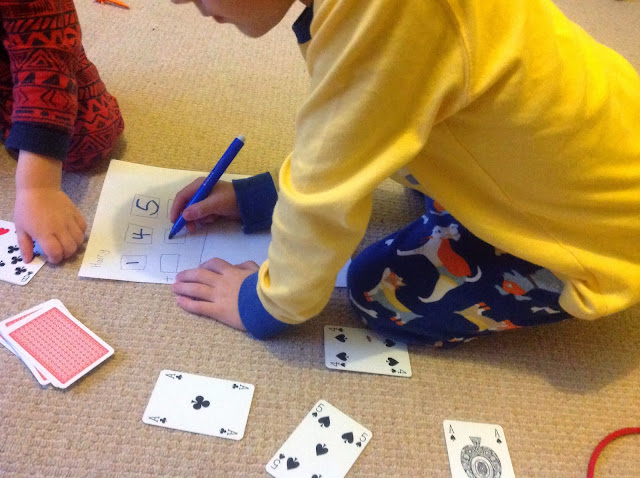 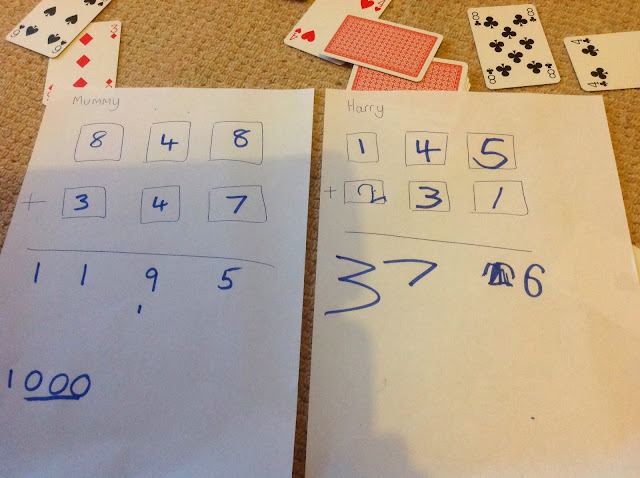 We also played target, another game from the book. We each threw 9 small bells (you can also use paper clips or coins) onto a target and recorded the number of hundreds, tens and units scored to get a total. Harry is definitely better at hitting the target than me - he won this 3 times! 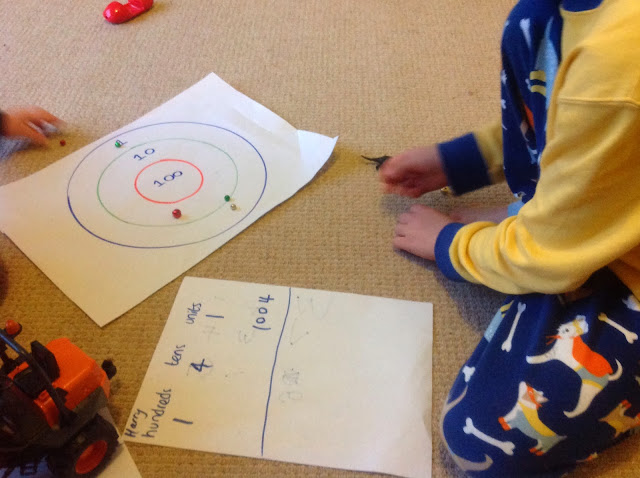 We then played Peter's new game, Insy Winsy Spider and he can now recognise 1-3 on the die without counting the dots. 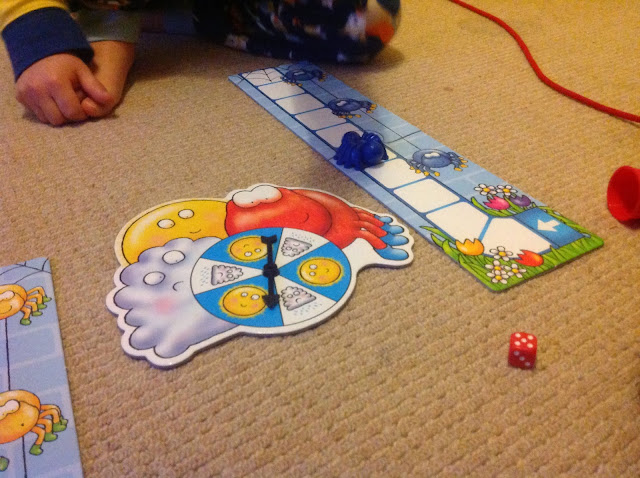 Harry was given some vouchers for iTunes for Christmas, which was a great present for him as he loves audio books. He spent most of yesterday afternoon and time this morning listening to two new ones. He chose a Jeremy James adventure by David Henry Wilson and Grk and the Pelotti Gang by Joshua Doder.
I went to see The Hobbit at the cinema last night with friends and Harry was very interested in the plot so we discussed that this morning (along with the fellowship of the ring from Lord of The Rings) and I showed him some google images of the film and characters. He is too young to see the films but we may read or listen to the story next year. He set up some Lego men and other toys in the scene of battling giant spiders. Peter was also listening and pretended to be Smaug hiding in the gold under his duvet!
We had a trip out to Wallington, a favourite National Trust property for the afternoon. It was very cold but we were all wrapped up and the boys had a great time with sticks and in the various adventure play sites. Harry spotted a few holes in the ground where he said animals might be hibernating and we saw a family of geese on the lake. 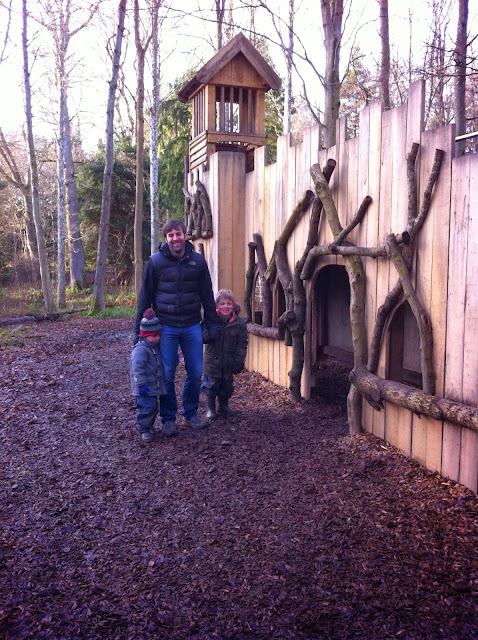 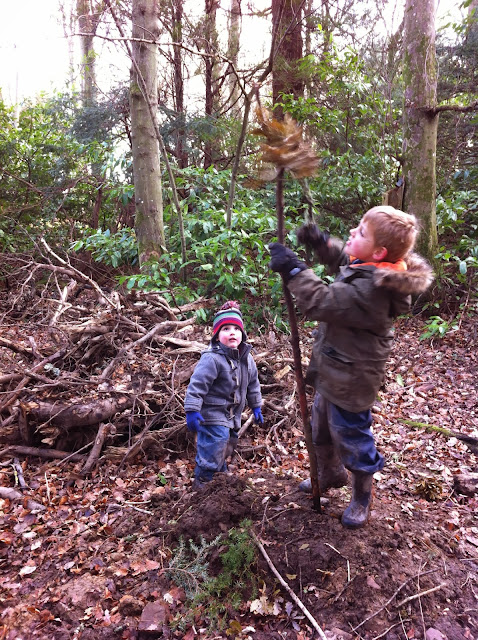 And of course what trip is complete without a bit of Climbing On Daddy! 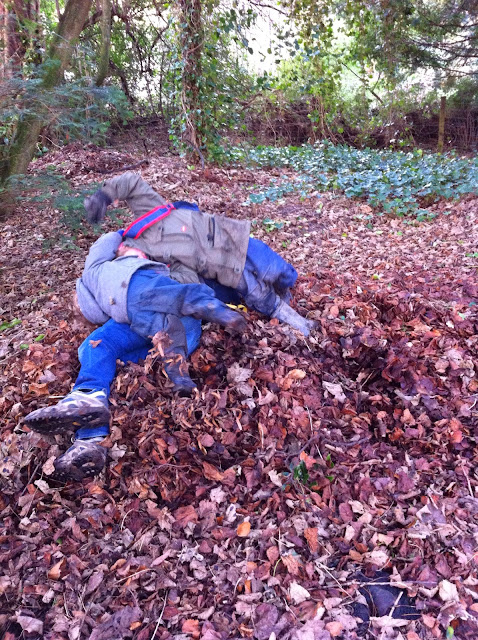