We had a morning of logical games today. We used some great German games a friend brought us. There is a pre-school one which Peter can now do and a harder one for Harry. They start with pictures covered by tiles, then take off a tile one at a time and match the image to a modified image on the board below (e.g. colours changed, direction changed, picture broken up). If the tiles are put in the correct place, a coloured pattern is made. 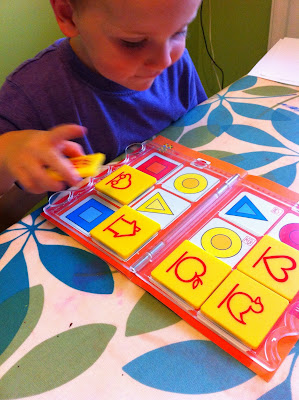 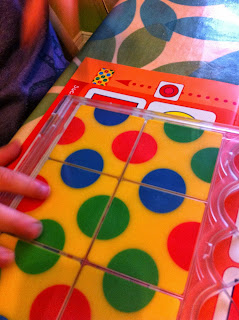 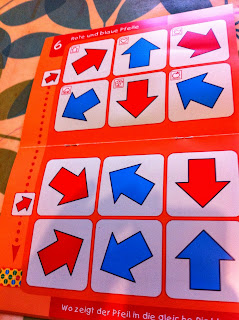 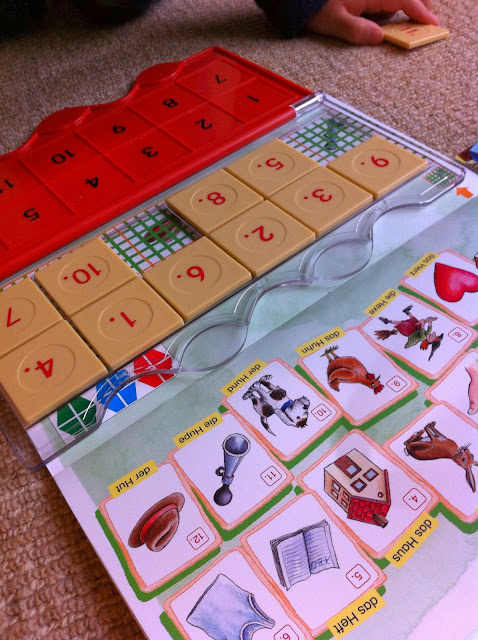 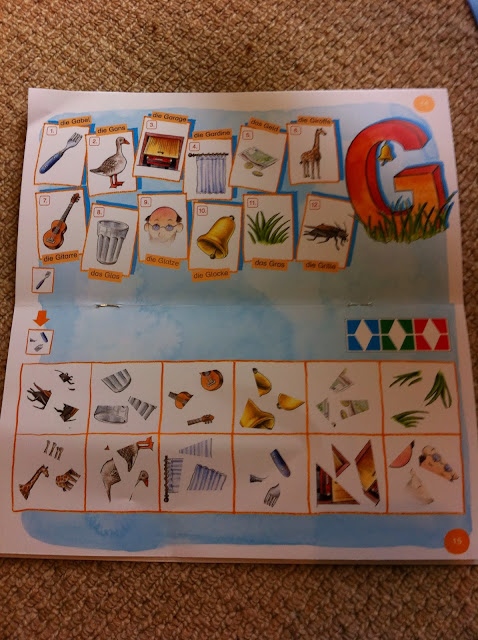 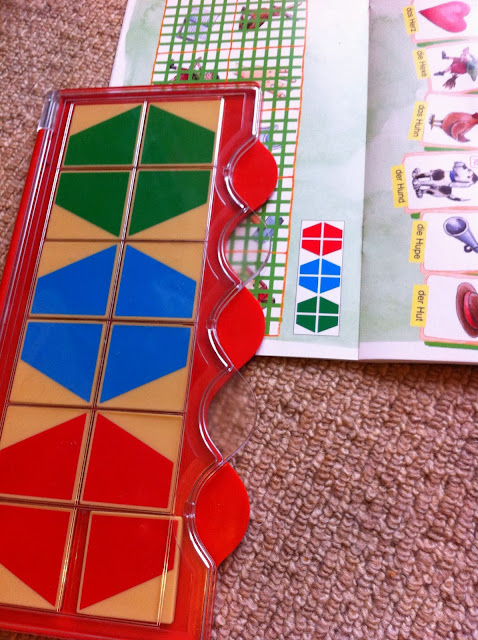 I made Harry some games from the Games for Learning book last night too. We started with 'Mr Yum's Cookies'. I drew a line of cookies all belonging to a certain class with a common characteristic, a line of cookies not belonging to that class and a line of mystery cookies. Harry had to look at the lines to decide which mystery cookie belonged to the first line, by finding the common characteristic. In this example, all the fizzet cookies had 2 swirls. 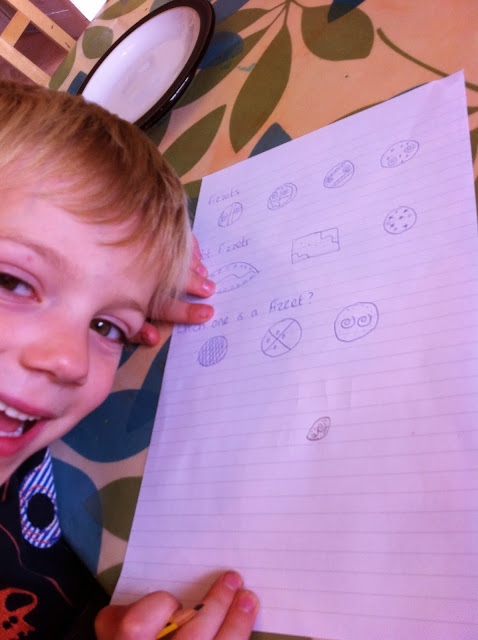 He also played 'Fix It'. I drew lines of patterns containing errors and he had to find the error and fix it. 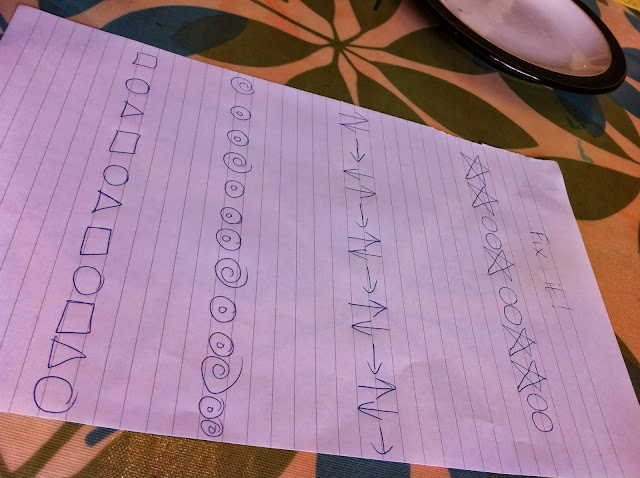 We all had a game of shopping list together, which turned into an hour long game of pretend shopping using Lego men. Harry and Peter took it in turns to be shopkeeper and the Lego men came to buy the little cards from the game. 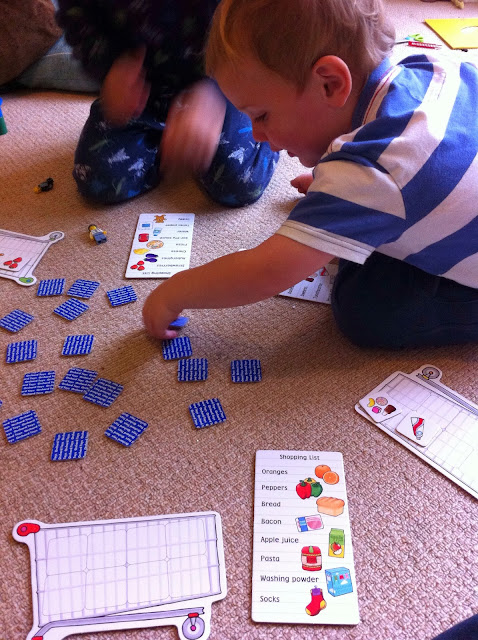 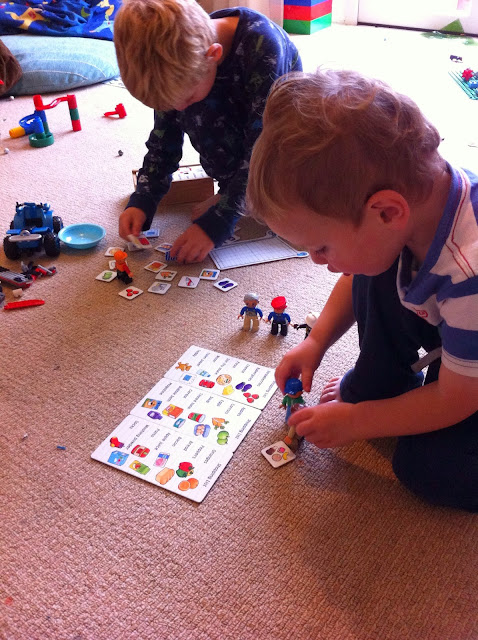 After lunch and cello practice, Harry read to me and then we played eraserman, which is also from the Games for Learning book and works on the same principle as hangman. The alphabet is shown so the letters can be crossed out when they have been guessed. Boxes are also shown to give a clue as to the letters - in this example the word is 'fireman' so the 'f' box is longer than the others. When Harry guessed incorrectly, a part of the man was rubbed out so the game is over either when the man is gone, or Harry gets the word. He did get the word and really enjoyed this so we will be doing it again. 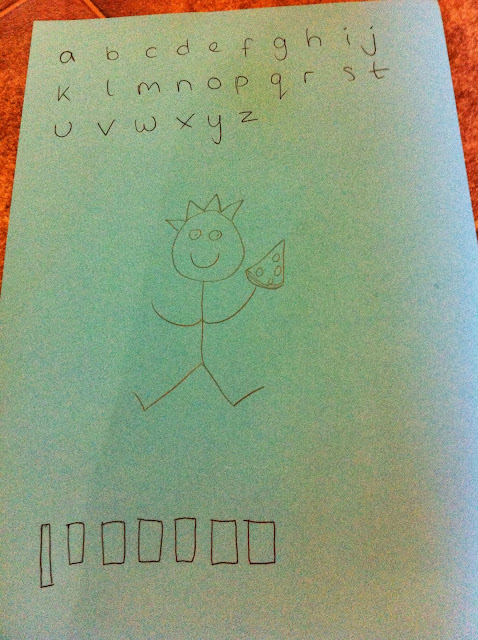 After a morning at home, we were in need of fresh air so the boys rode their bikes to the allotment. We did a great 2 hour shift of weeding and brought some more corn home. Harry also picked a little pot of blackberries from another allotment (he has been given permission!) and had them on a meringue for his pudding.

We also played in the garden with balls for half an hour. Peter was throwing and catching and Harry was practising heading the ball. He was really good at it and said that is what he has done at his enjoy-a-ball class recently.

It has been a lovely, full day. This was much needed as yesterday was a tired and grumpy day all round!
Posted by Hayley at 21:18