We are very fortunate in Newcastle to have a great museum service, which offers learning workshops and object loan boxes on a variety of topics. We are able to access these resources as home educators too and we have been using the Ancient Egypt object loan box these past two weeks. We have taken it to our Tuesday group session to share and done a couple of extra activities at home.

We started by looking at the mummy. The children removed the internal organs (which fit inside the mummy under a fabric flap) and brain using the brain hook (a very popular activity!). We looked at the canopic jars, statue of Anubis and shabti and the instructions for wrapping a mummy, before wrapping the children in kitchen roll. 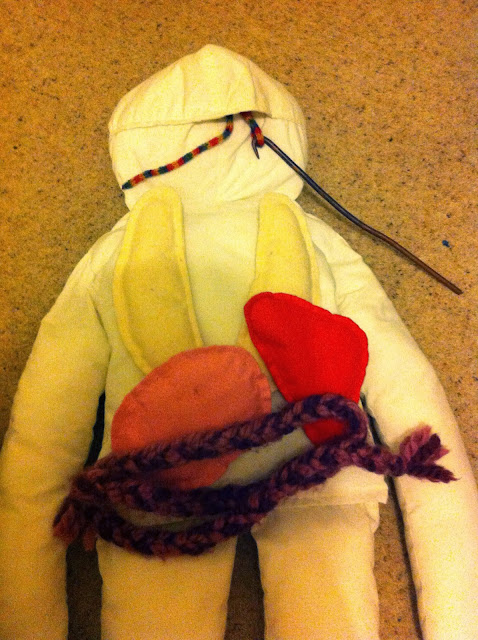 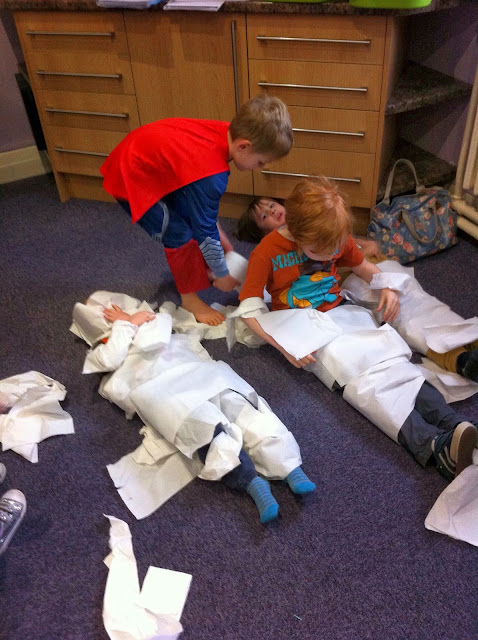 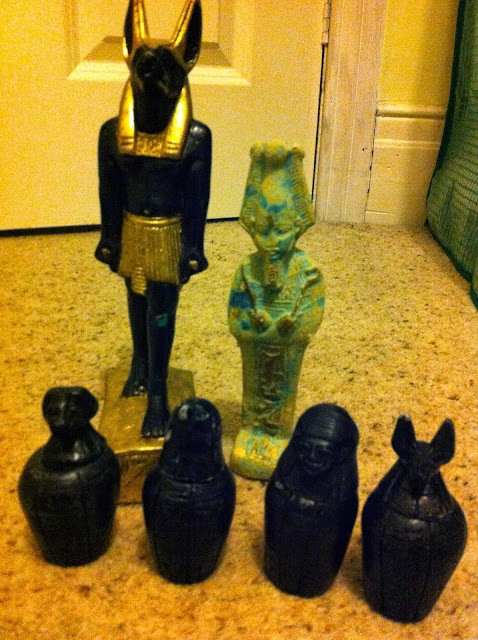 We also did a mummification experiment using bread - we took three pieces of bread and placed one in a bag plain, one covered with salt and one spread with antiseptic ointment (Savlon). This is to show how the methods of mummification (drying with salt and wrapping in oiled bandages) worked to stop the bodies rotting, as the plain bread started to mould first. 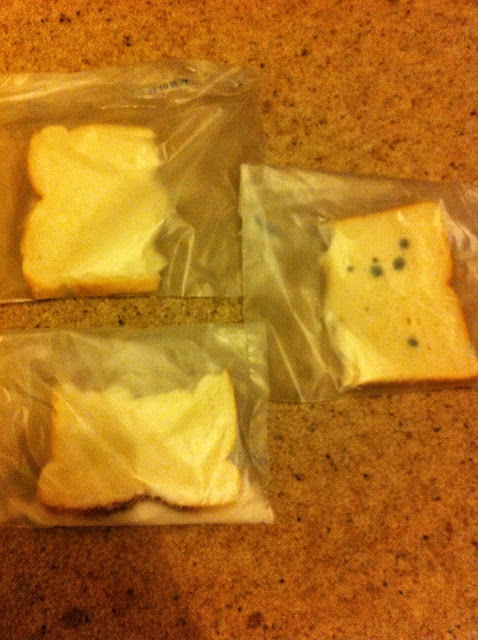 In the second week at our Tuesday group, we looked at the replica Rosetta Stone, seal ring, the hieroglyphic alphabet and Egyptian drawing. 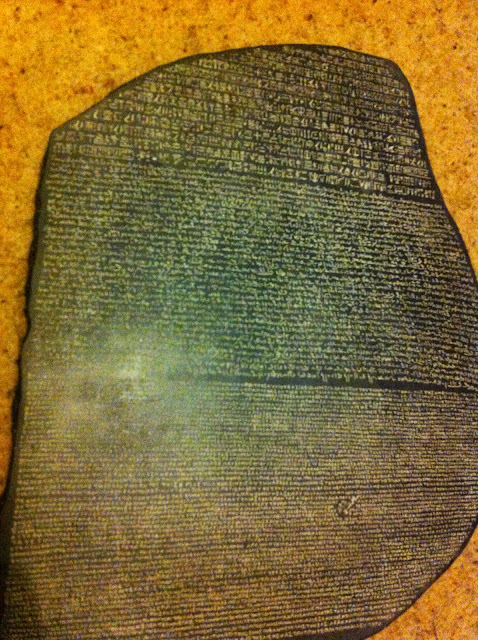 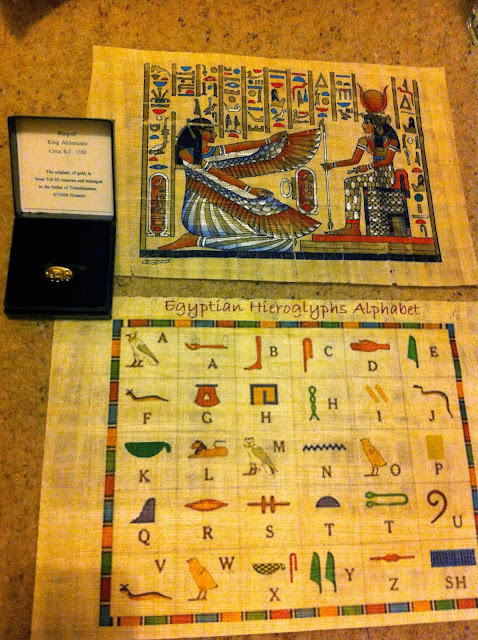 We also read this great book which has lots of information in the back. The children each made a small batch of salt dough to craft something related to Ancient Egypt. Peter made a flat plain as the country of Egypt and we made the River Nile and a Pyramid to go on it. Harry made some turkey legs for the Egyptians to eat, as we had talked about their diet consisting of meat and bread. They will paint these when they have dried. 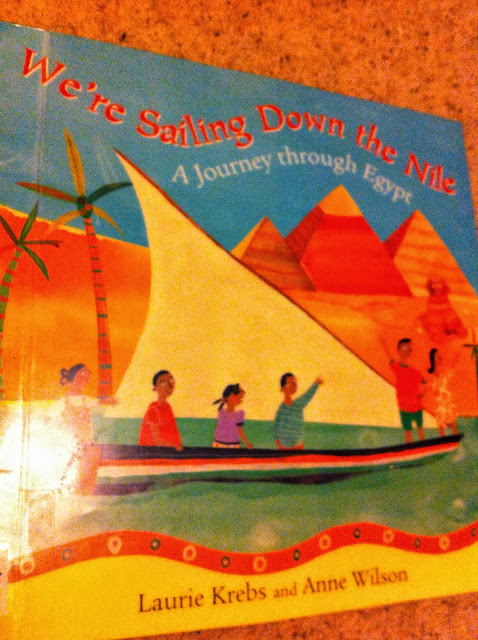 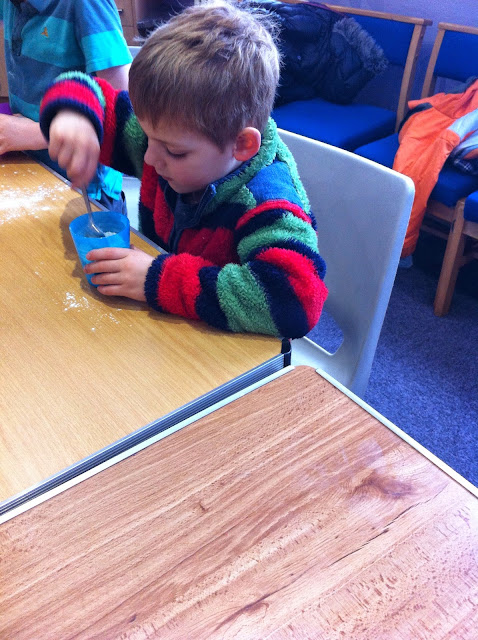 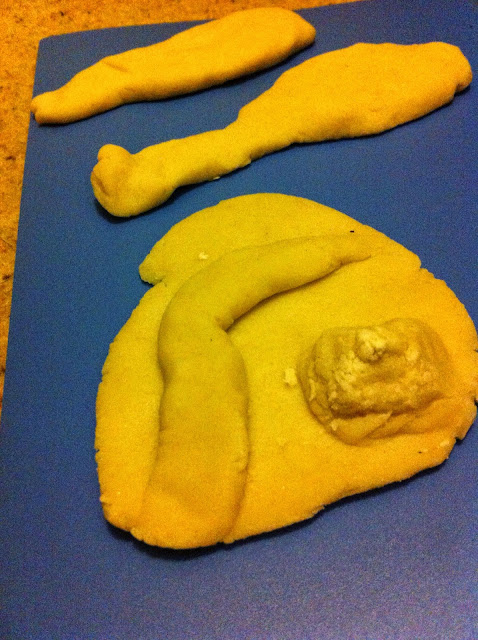 The resource book that comes with the object loan box contains lots of general ideas for engaging children with museum objects and sheets to print at the back. I have included a link here as we found it really useful and will use it again in the future. We used some of the ideas with the Egypt objects - storyboard, inference sheet and news report writing.

Harry created a storyboard for a silver shell pendant. I gave him a selection of objects to choose from. He thought how the pendant came into being for the start of its story, what the person wearing it might have experienced for the middle and where it ended when the person died. He had some great ideas and has obviously picked up a lot of facts about Ancient Egypt from our work. 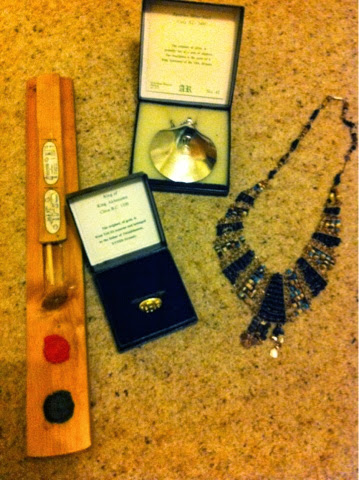 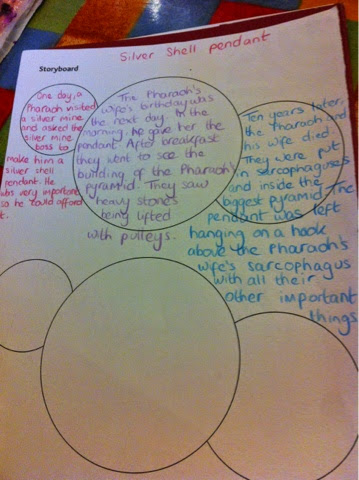 We passed around a mystery object (a farming hoe) at our Tuesday group session and the children shared their ideas about what it was. We filled in this inference sheet at the same time. 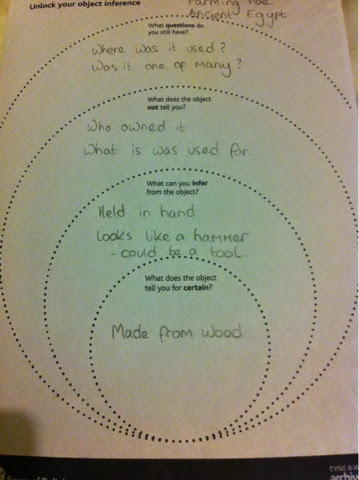 Harry also chose an object to be the subject of a newspaper article. He wrote an article based on the theft of the Rosetta Stone - I did most of the writing as he was thinking quicker than he could write and this was about content not handwriting. Harry made a great effort. He was really interested in this and went outside to post the report through the letterbox. We also played a role play game involving catching the thief, recovering the stone and sending the thief to the judge (Harry allowed the thief to go free on the condition he got a job instead of stealing!). We also talked about DNA and why leaving a tissue behind might help the police to catch the thief. I loved his imaginative name for the museum manager - Jem Trophy - as he said museums contain gems and trophies! 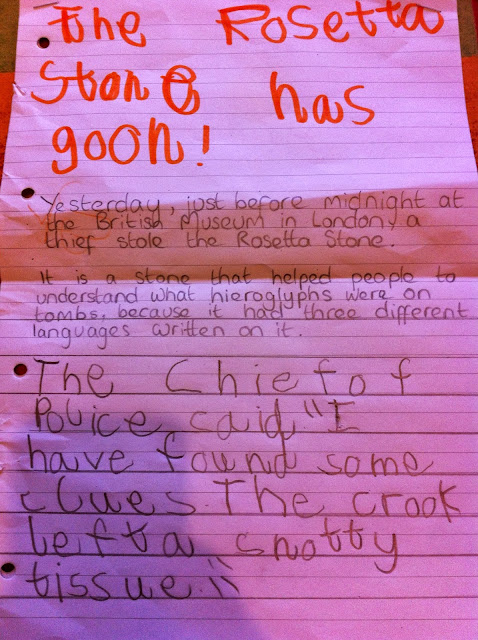 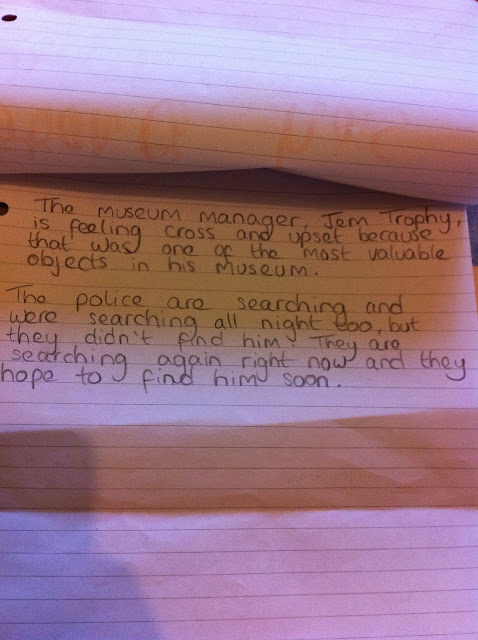 We have really enjoyed this hands-on experience and will definitely use the object loan box service again for a different topic.
Posted by Hayley at 16:46