Jack and the Beanstalk activities

We have been working to a theme of the classic story of Jack and the Beanstalk these last two weeks. I don't normally split our activities into subject areas but I have done so this time as there is a lot to include! It has been a very popular theme.

We have two versions of Jack and the Beanstalk at home and we have read them both several times. The longer version has a lot more detail in and Harry and Peter did well describing the extra objects and events compared to the shorter version. 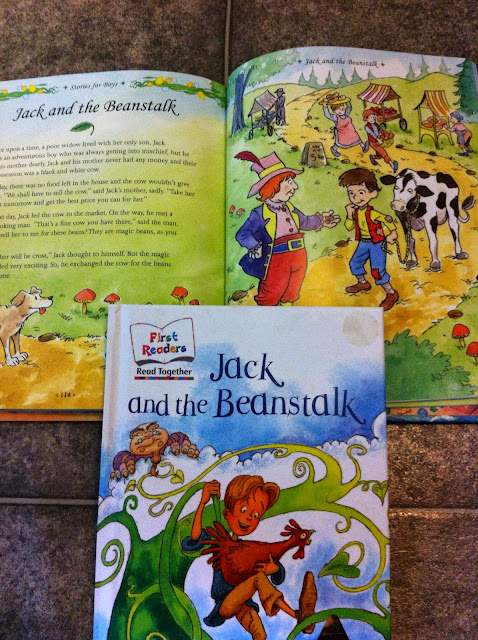 They retold the story using our beanstalk and printed set (see craft activities below). I asked Peter questions as we went along and asked Harry to think of some new events for his version of the story. He added that Jack sold the cow for the beans and an axe, to explain how he had an axe. He also added that the beanstalk grew bags of money hanging from its branches so Jack didn't need to climb to the top of the beanstalk! This would make for a very different version of events for Jack. 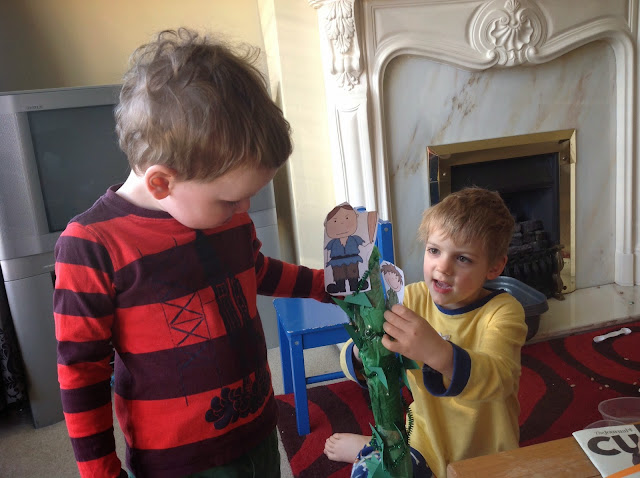 Peter matched up letters from some of the story words using this sheet I made. He cut out each letter then glued it to the correct place. 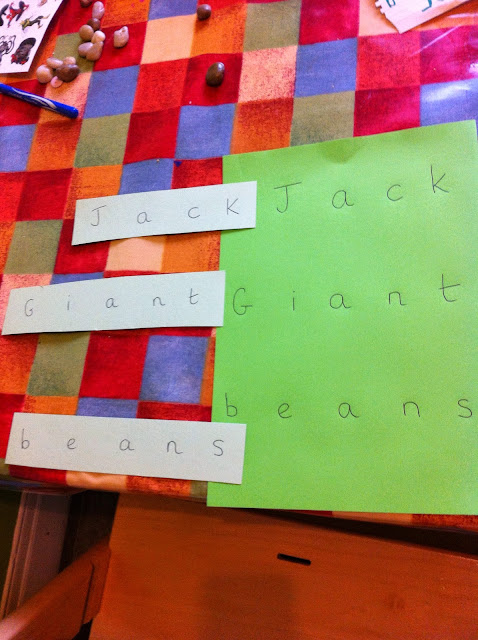 Harry thought of a simile and adjectives to describe the giant and I asked him to make ten new words from the letters of the word 'beanstalk'. I made letter tiles for him to use to do this. 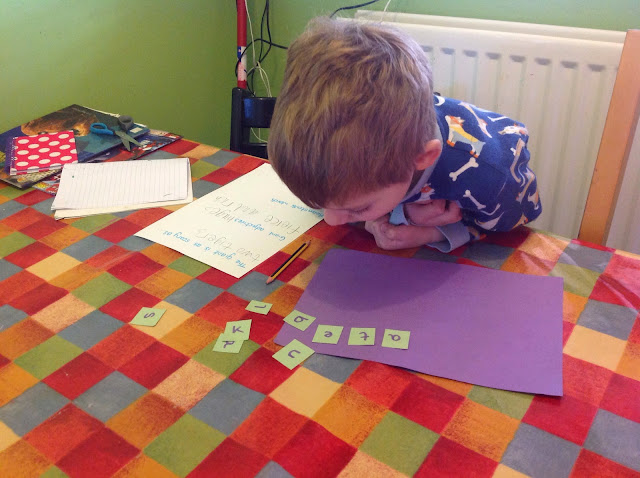 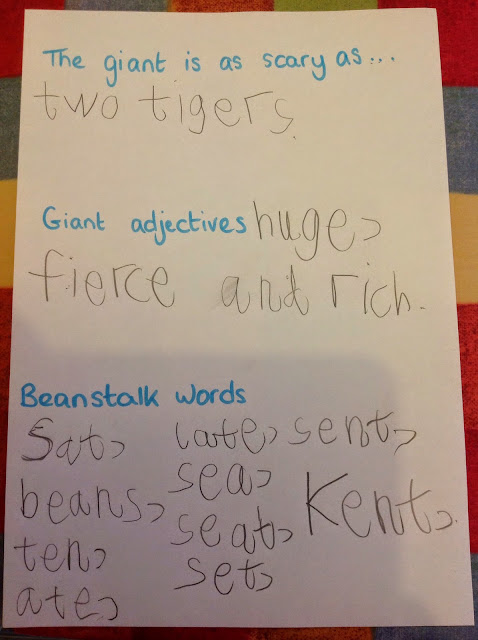 The boys have had great fun with a sensory tub of dry beans. I painted some gold and green as the magic beans and they both wanted to paint their own selection too. Harry started sorting the beans immediately into type. Peter used them to feed the toy cow we added to the story characters, make pretend cups of tea and scoop and pour. They played with these beans for a whole afternoon when I first got them out! 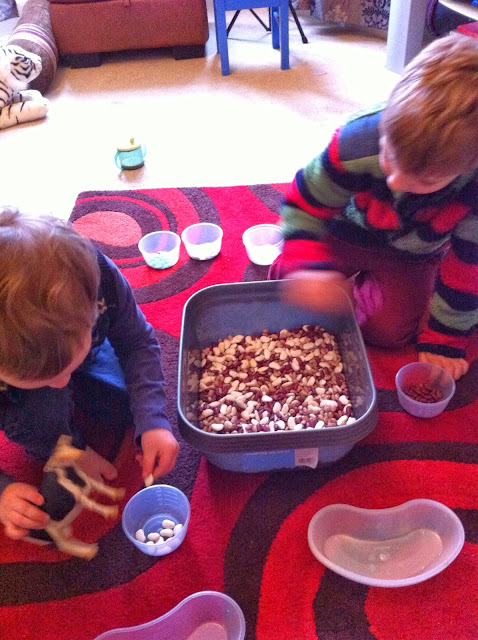 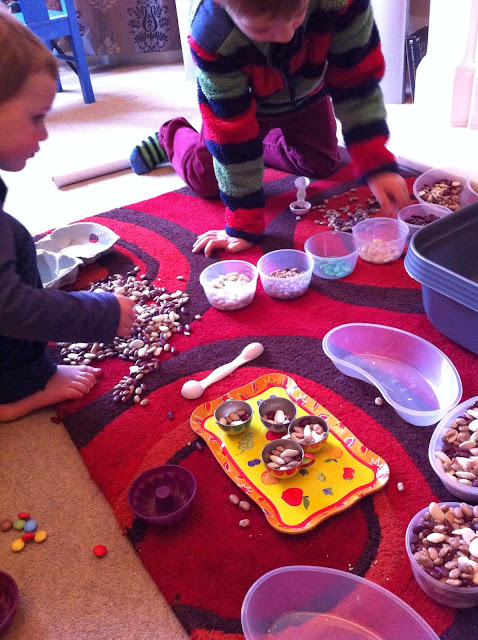 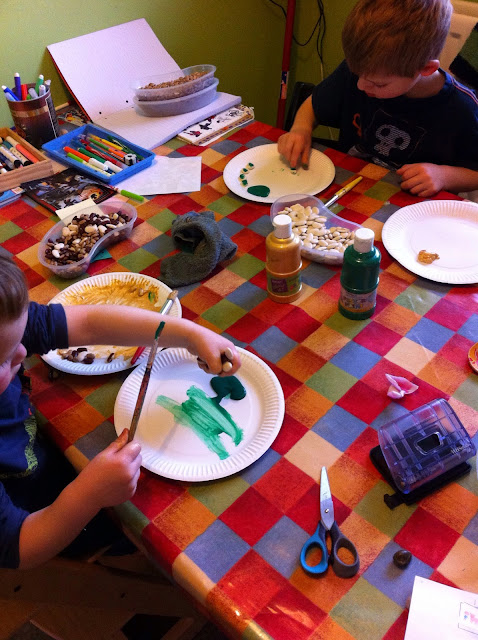 We made a beanstalk to add to the bean tub that looked great and was really quick. The idea was from here. I set out the materials and didn't need to help much. They both really enjoyed threading the leaves onto pipecleaners. 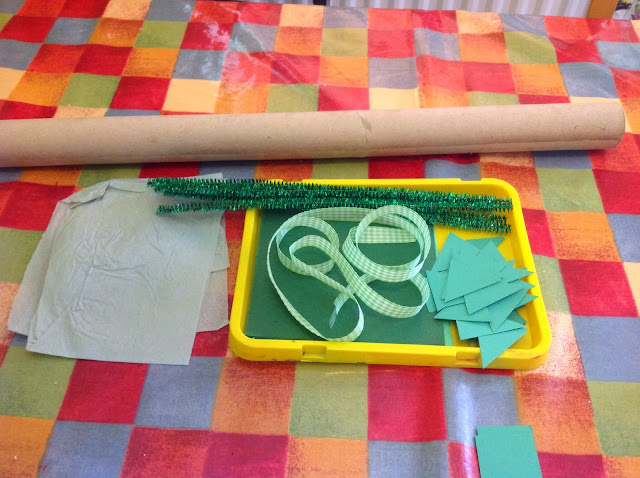 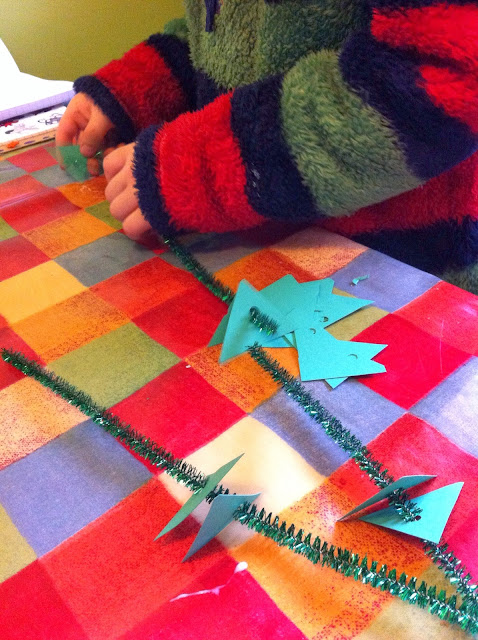 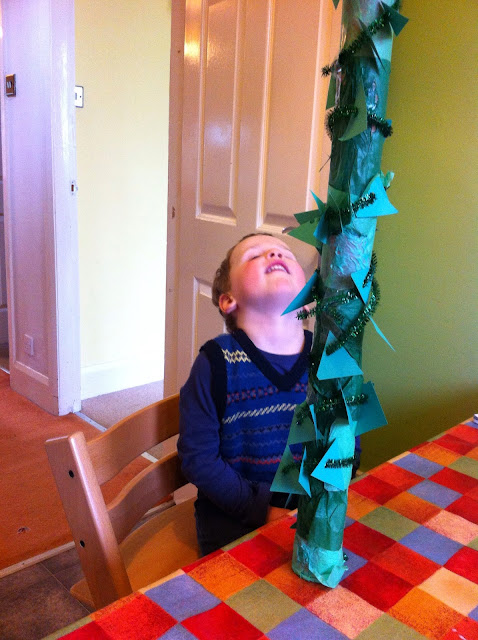 We made a land of clouds for the top of the beanstalk using a paper plate and cotton wool and Harry added the items from the lovely printable set from here for the characters and objects from the story. 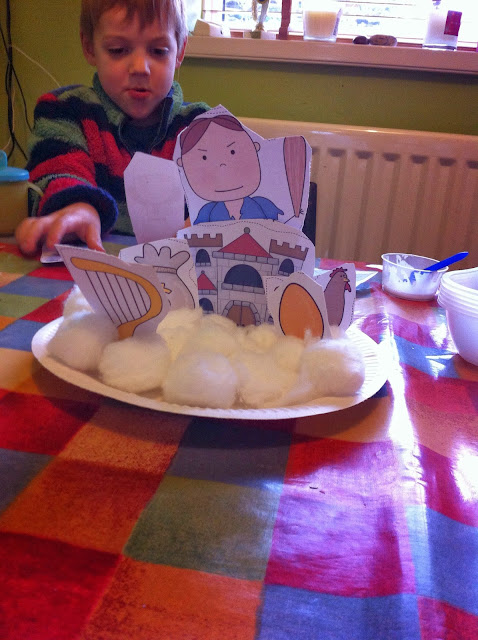 The boys also wanted to use the dry beans to make glued pictures. Peter added as many as he could and said it was a pebble beach! Harry coloured some with metallic pens and made a treasure chest for them to go in. He also made a space rocket. 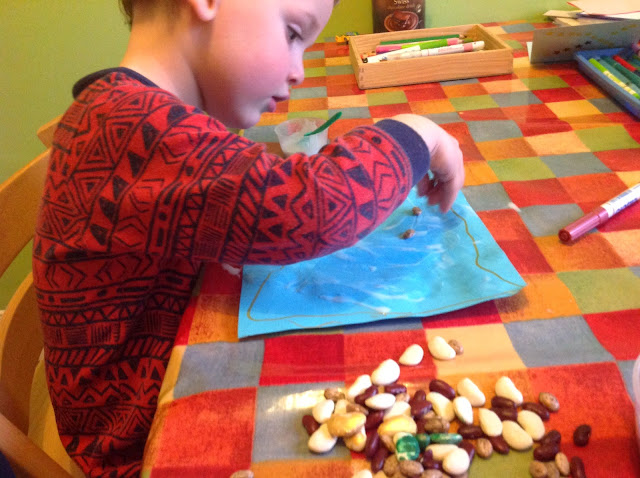 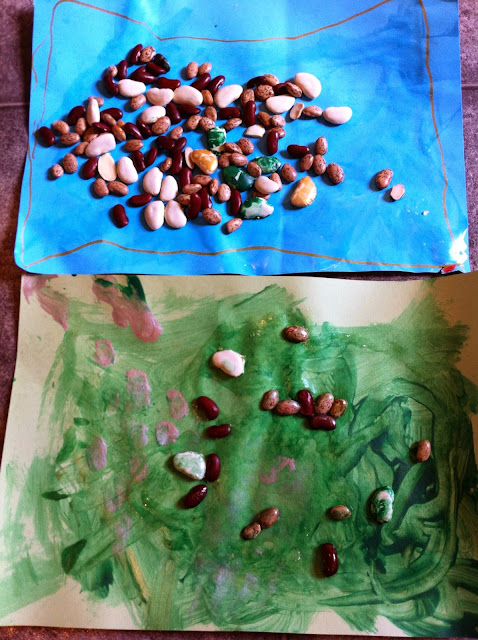 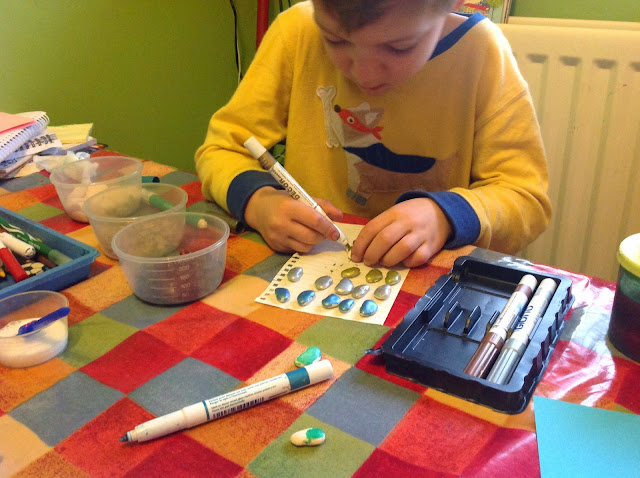 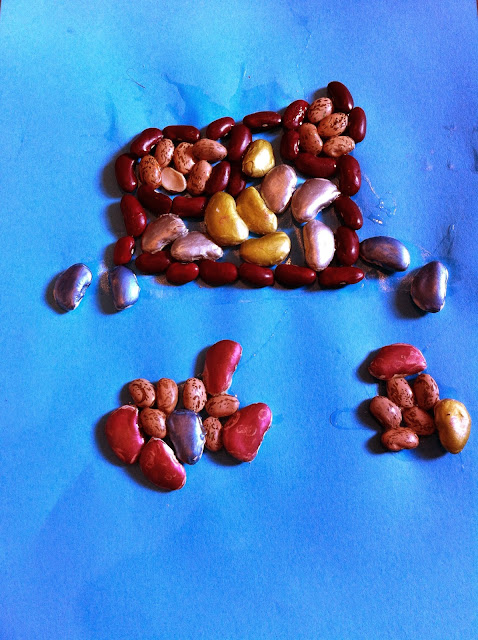 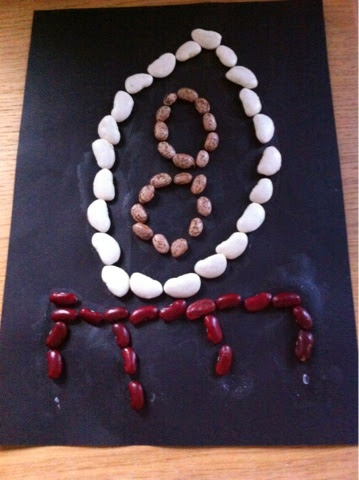 Peter did some of the activities from this printable pack - cotton bud paint dots to fill in letters and cutting and matching characters to their shadows. 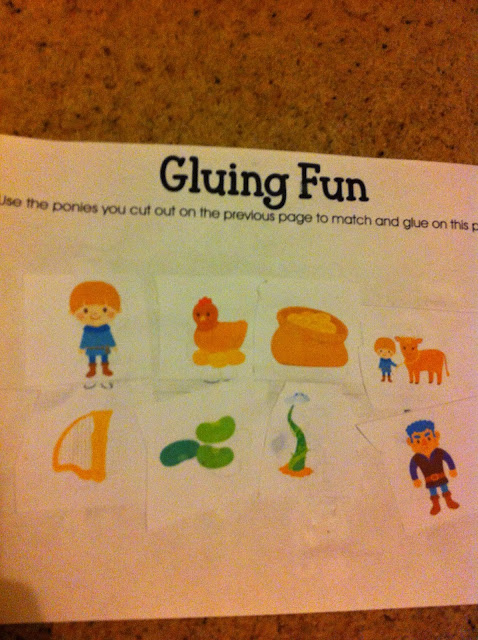 We soaked some of each type of dry bean in water then compared them. We also took them apart to see the seed coat, root and leaves inside. The difference in size after one night soaking was amazing and they came apart really easily. 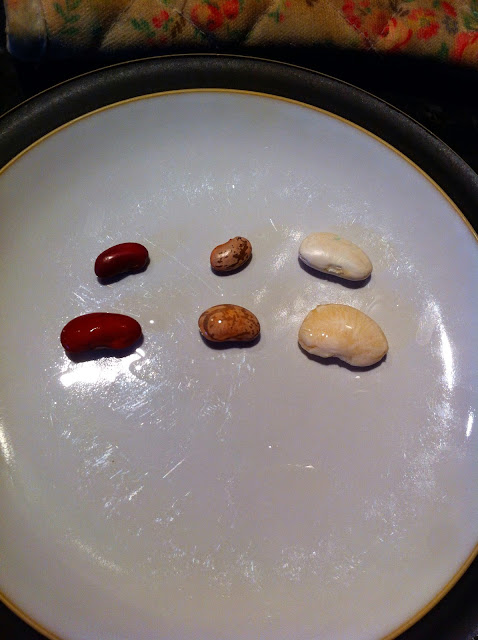 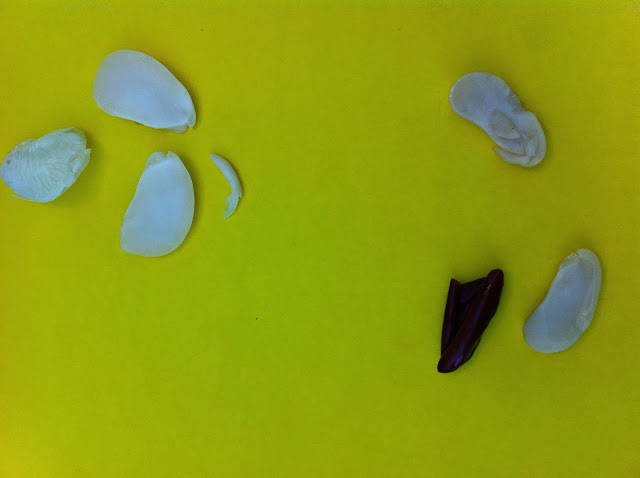 I had some lap book activities already prepared for Spring based on plant life so we tied this into the beanstalk theme and looking at the beans. Harry completed the mini books as a display poster, answering questions about the parts of a plant and the purpose of each part. 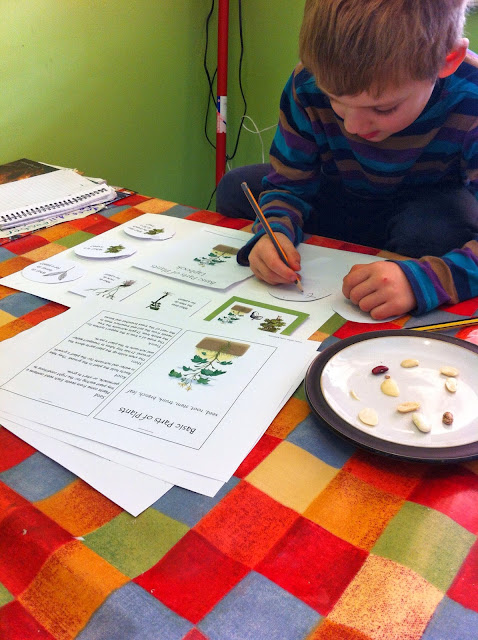 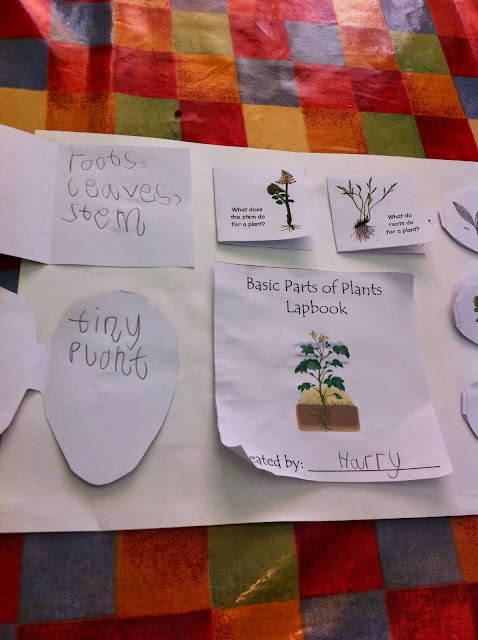 We also did some maths activities using the dry beans several times. I thought I should get value out of them seeing as they have littered my living room floor for a whole two weeks! Peter matched the correct number of beans to numbers on paper plates. Harry filled pots with the correct number of beans to answer sums I wrote for him. We also did some fractions. I gave him a group of beans and asked him to place the correct amount on plates for half, third and quarter fractions. Harry likes using manipulatives for maths and the beans worked well for this. 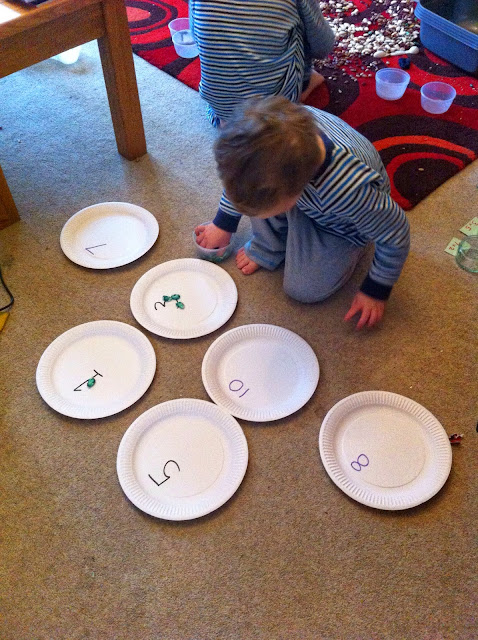 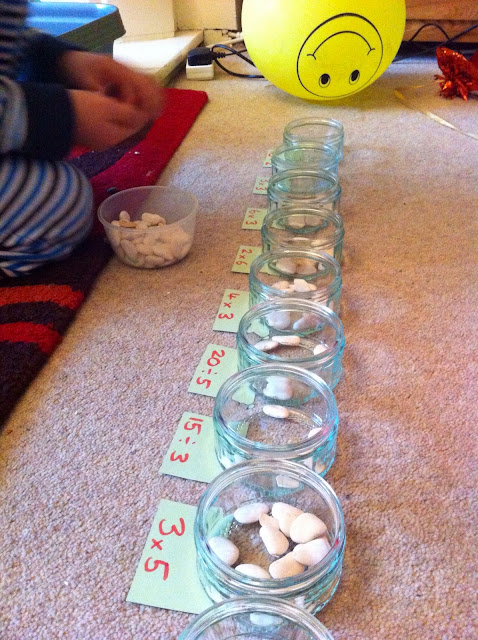 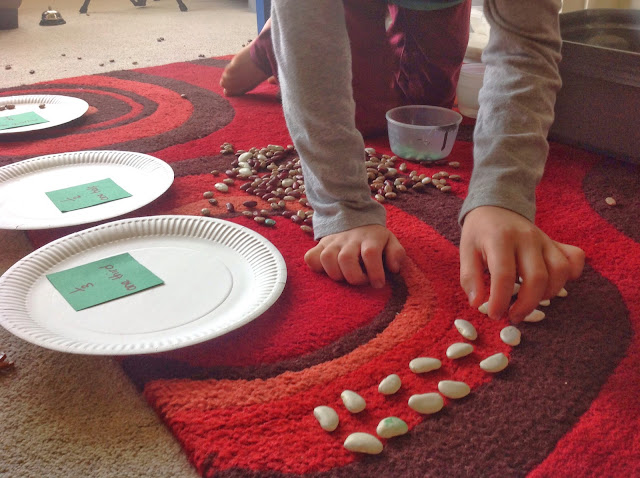 We cooked using beans too (although not the ones that had been played with all week!). We used a recipe from Jamie's Italy cookbook for fagioli all'italiana. 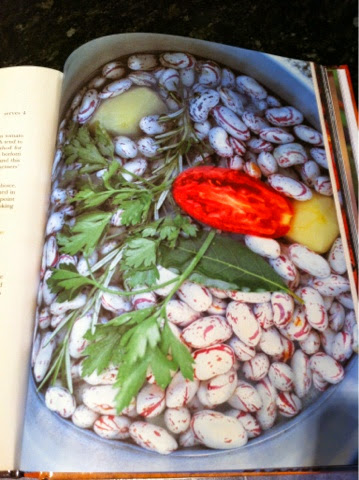 Harry did all the preparation himself, including collecting herbs from the allotment to use. The herb smell as they cooked was great! We used the beans in a casserole for tea. 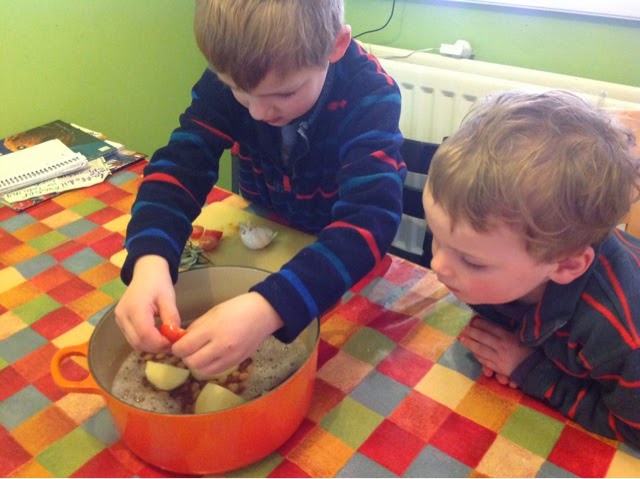 We have had great value and enjoyment from the Jack and the Beanstalk theme and I am sure we may use this one again!
Posted by Hayley at 09:18