James and the Giant Peach activities

Amazon.co.uk
When poor James Henry Trotter loses his parents in a horrible rhinoceros accident, he is forced to live with his two wicked aunts, Aunt Sponge and Aunt Spiker. After three years he becomes "the saddest and loneliest boy you could find". Then one day, a wizened old man in a dark-green suit gives James a bag of magic crystals that promise to reverse his misery forever. When James accidentally spills the crystals on his aunts' withered peach tree, he sets the adventure in motion. From the old tree a single peach grows, and grows, and grows some more, until finally James climbs inside the giant fruit and rolls away from his despicable aunts to a whole new life. James befriends an assortment of hilarious characters, including Grasshopper, Earthworm, Miss Spider and Centipede. 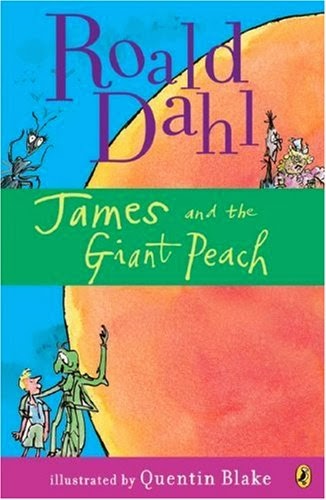 We really enjoyed reading James and the Giant Peach over the Christmas holiday and have also enjoyed the themed activities. This website had great ideas for the book, along with activity ideas for many other books. We haven't been doing book studies recently but I am going to start again as the activities are popular with both boys and we can always include English, Maths and craft (and other topics depending on the themes of the book) in a creative way. The themed activities make a nice looking display on the wall too so we have made a James and The Giant Peach wall. 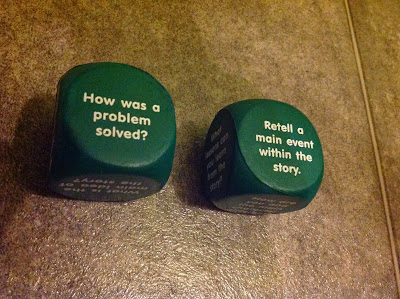 He chose the problem of getting away from the sharks in the water, which was solved by hooking spider silk over seagulls to fly away and he retold the part where the peach rolls away from the garden. He gave good, full answers with lots of detail and I wrote them down for him.

The word 'peculiar' is used to good effect in the book so I asked Harry to think what it means and think of some synonyms. He said it means 'odd' and thought of amazing as a synonym. We looked in the dictionary to find 'strange' and 'unusual' too. He remembered that describing words are called adjectives too, which surprised me. He wrote the synonyms in a small flap book for our display. 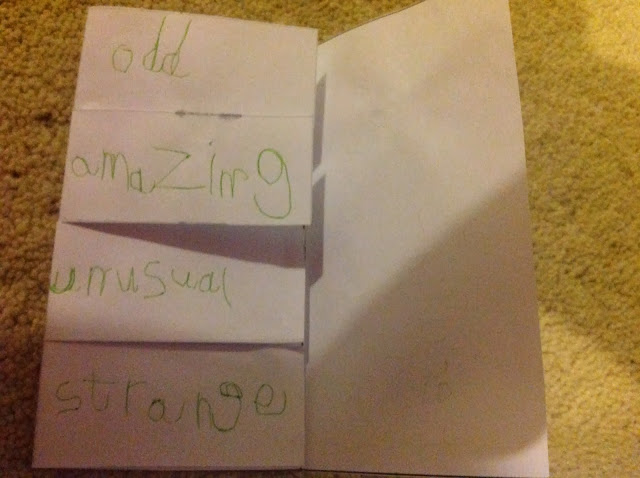 We stuck the flap book to the top of his story. I gave him the start of a story, taken from the book and asked him to continue it - 'Something is about to happen, he told himself. Something peculiar is about to happen at any moment...'. It was interesting to notice that he took events from his life, from Lego games I see him play and from books to create his story. An improvement he has made recently is using different words to start sentences and I noticed it in this story. 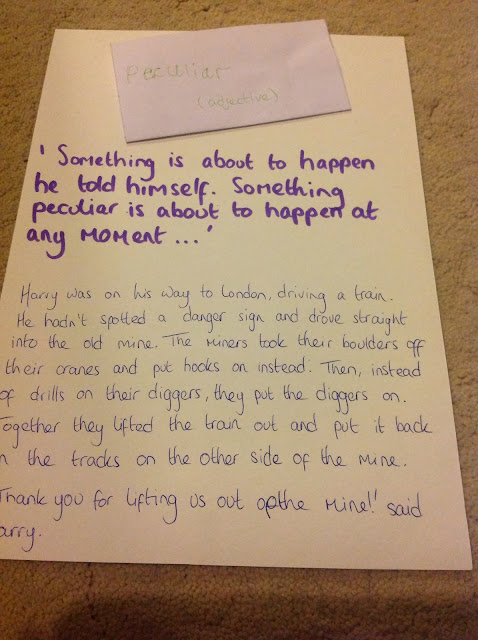 I prepared some activities for Peter too. It was a good chance to start looking at the letter 'P' (for peach and Peter). He coloured some letter sheets as we worked and we practised saying the 'P' sound. We found the correct letter from his Duplo collection and we put it on the kitchen windowsill to look at this week. I have also been pointing out the letter 'P' when we have been reading and he seems to remember it. 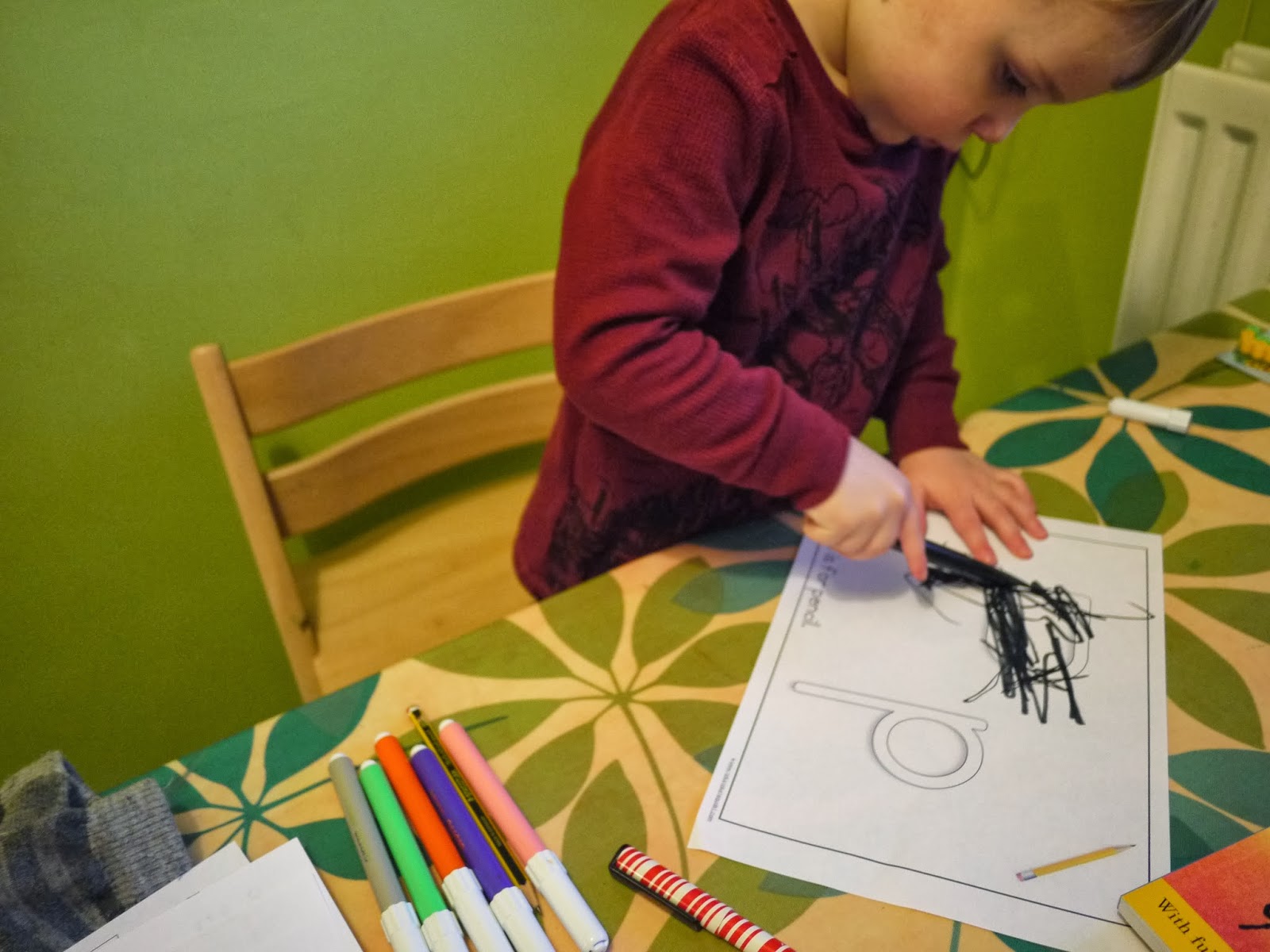 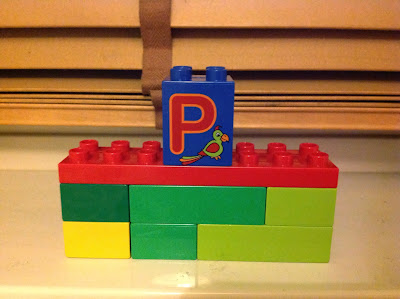 We had a look at one of the illustrations and tried to imagine such a huge peach. 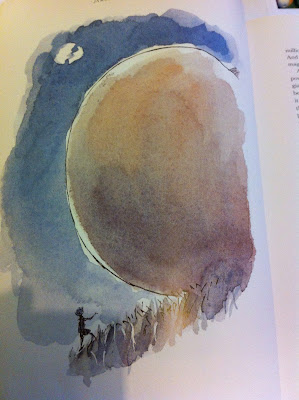 We measured James and the peach in the illustration and determined that the peach was around 7 times taller than James. We then measured Harry and multiplied his height by 7 to get the height of our imaginary peach. We talked about scale drawings and I showed Harry one of his Top Trumps cards, which had a scale drawing. Harry then drew a scale drawing of him next to the giant peach, by scaling each measurement down by 25. 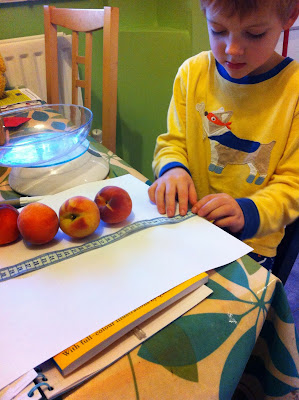 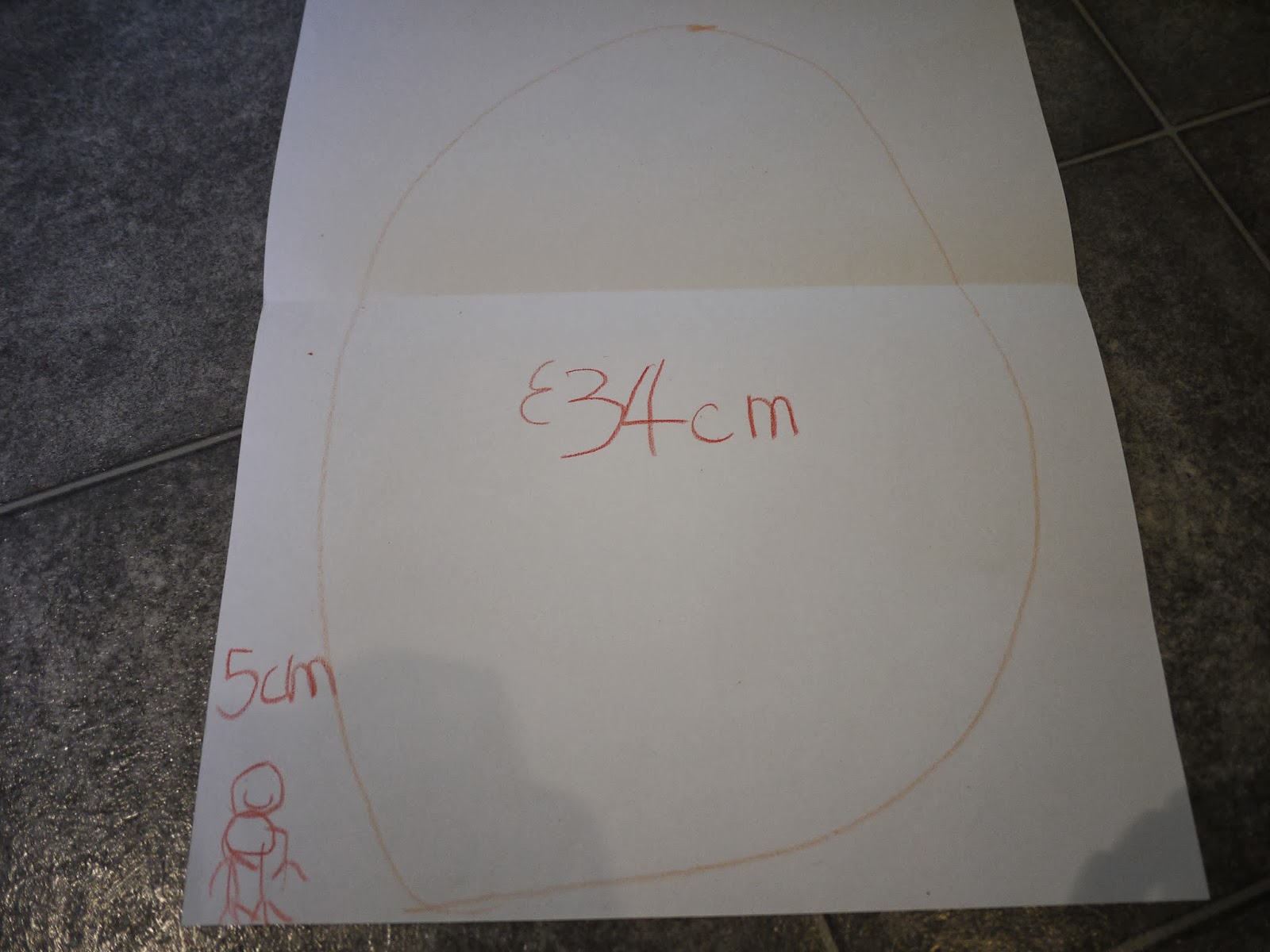 He also weighed 3 real peaches to get an average weight of 91g and measured the circumference of a real peach. After the craft activity below, he wrote these peach facts in small flap books and stuck them to his painting of the peach. 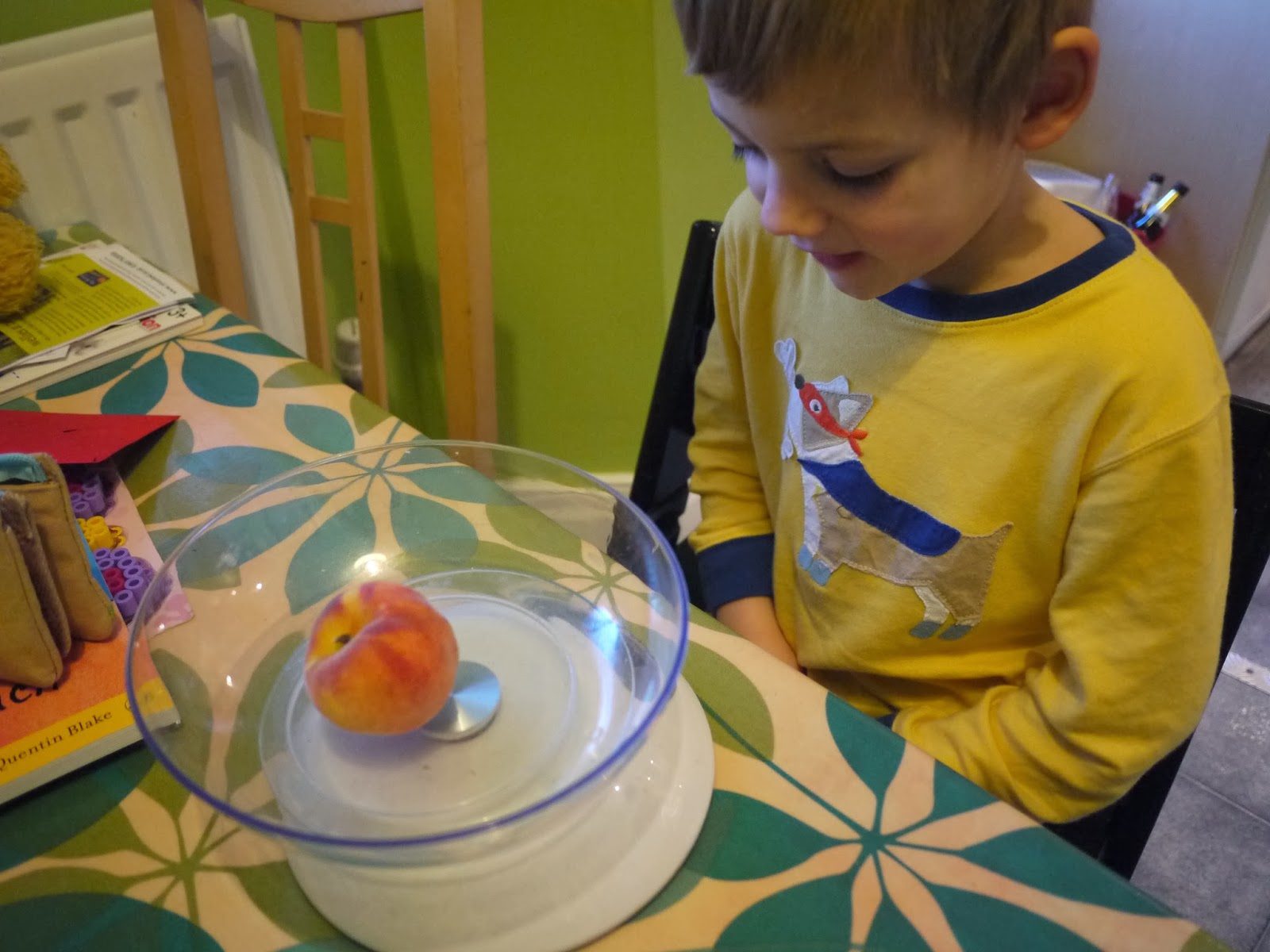 As we had the real peaches for the maths activity, we tried to paint them too. We mixed a peach colour for this using red, yellow and white. I painted a centipede on mine too and Harry liked this so he followed up by painting the ladybird and spider from the book, along with a centipede. Peter made a good attempt at the right shape and Harry tried to get the different shades of colour we could see. 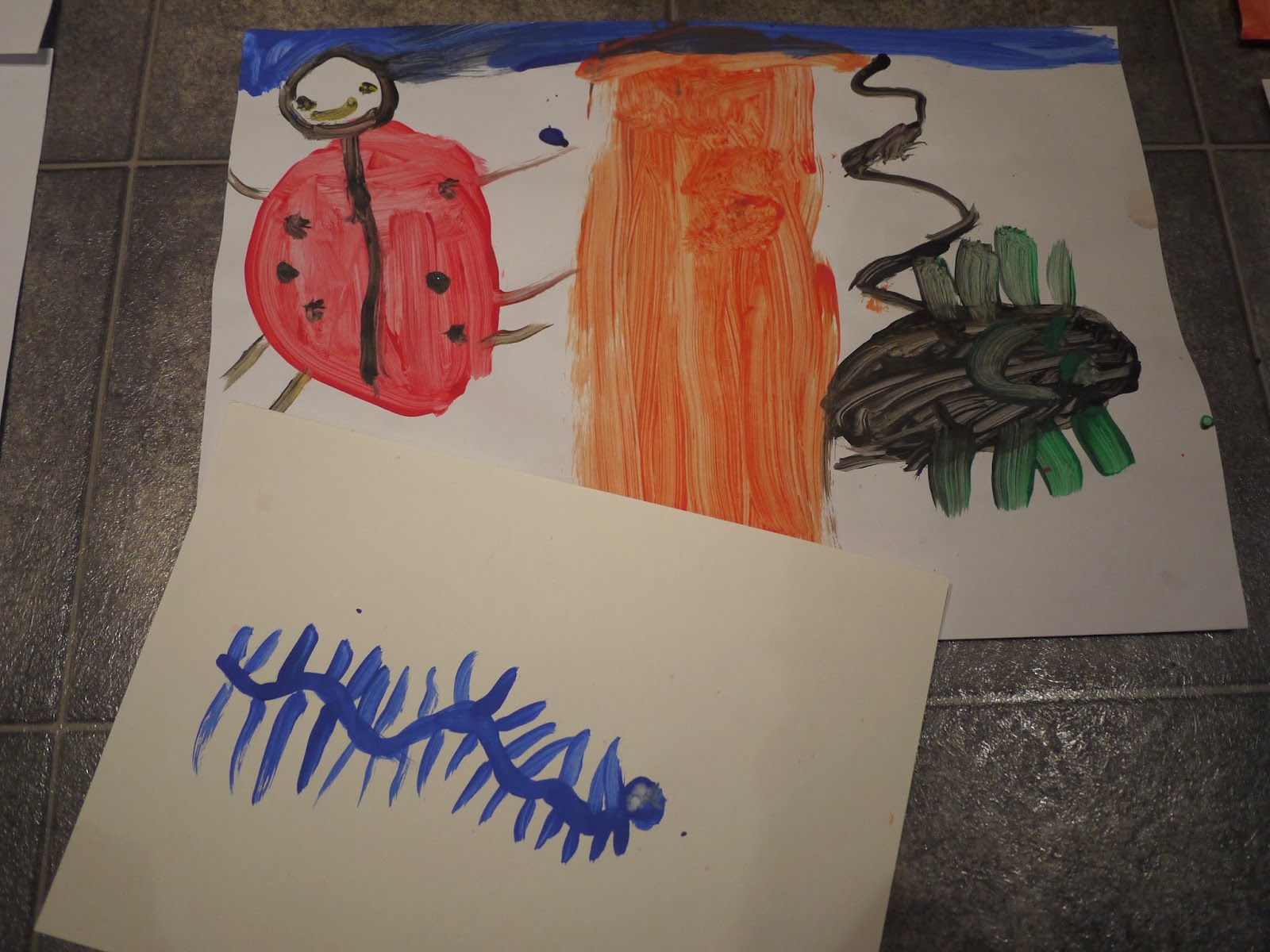 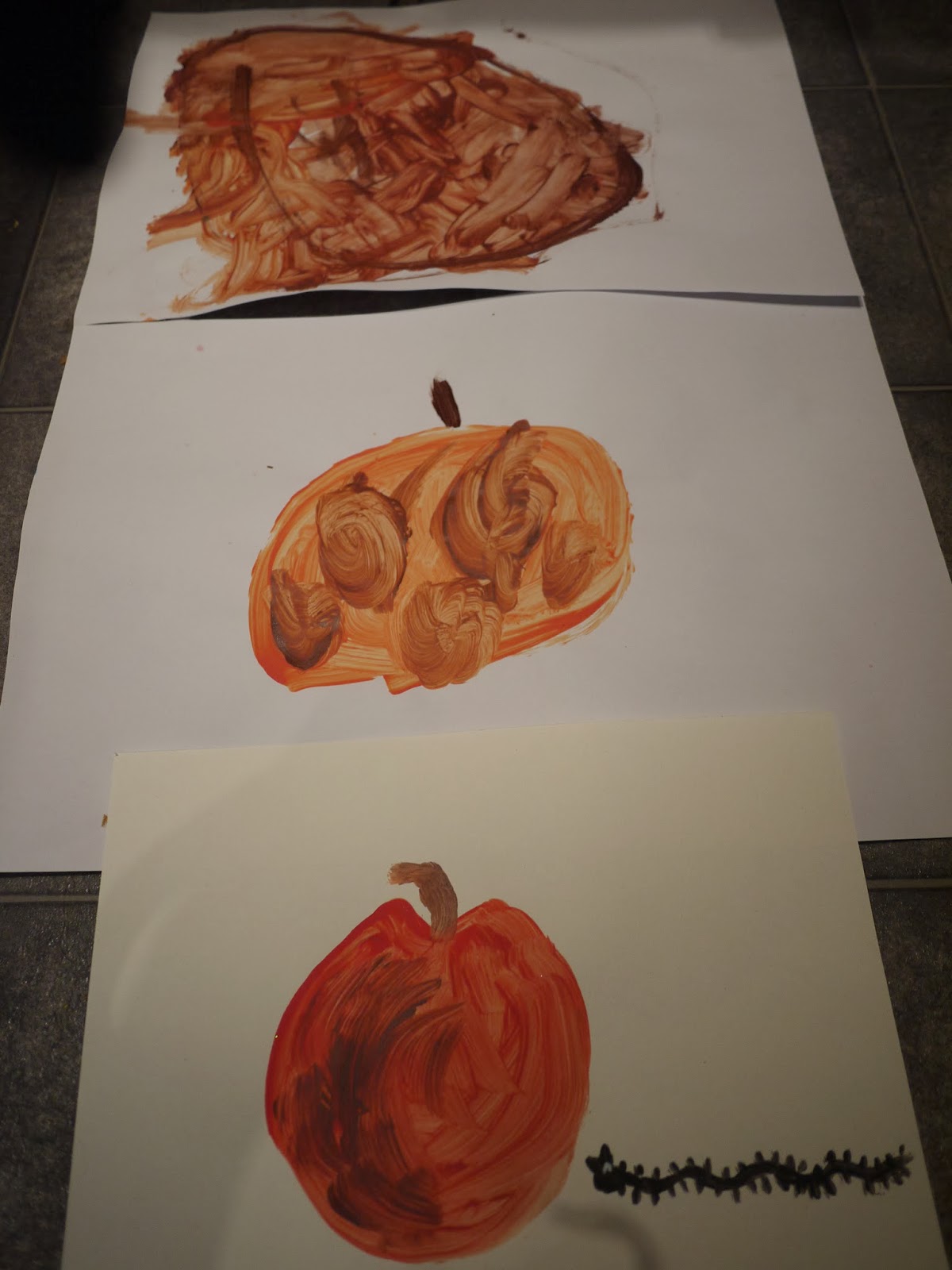 We used Harry's centipede picture as inspiration to discover some more facts about them. We read this library book and searched online, looking for facts such as diet, habitat and size. Harry wrote the facts on the inside of flap books, answering questions I had written on the front and stuck these around his centipede painting. 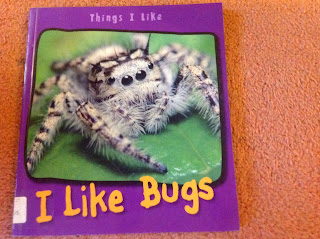 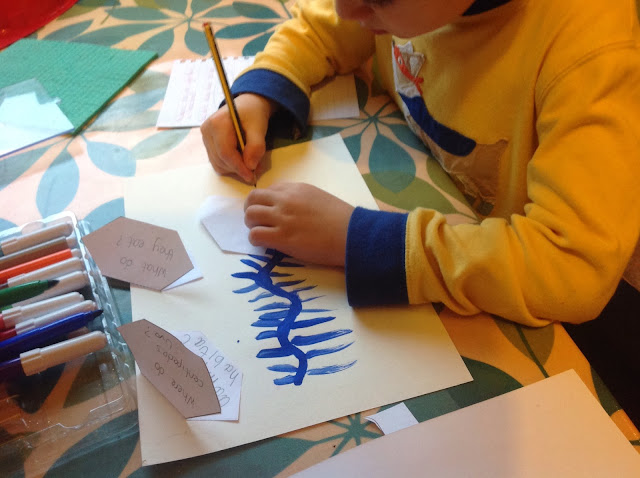 This book and the themed activities have been very popular in our house. I am sure more of the Roald Dahl books will be well received too. 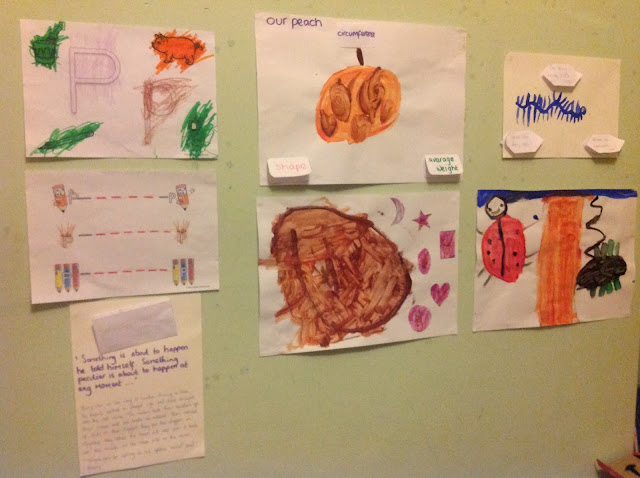