Our home education day at home

We have done so much today, as we tend to do when we are at home all day. I usually aim for a day around the house on Wednesday as we have busy days out of the house either side (and it is usually the only day of the week we stay at home all day).

We started this morning with some spelling practise. I have never done this before and I think it will naturally come with more fluent reading but I just want to start so that Harry has the confidence to write on his own without me sitting beside him. I am using these sheets which I like as they have short lists of words and start from the very basics. He got 6 out of 10 correct, which I was pleased with. He checked his own answers and I have designated an exercise book as a spelling book so we can work on this through the year. 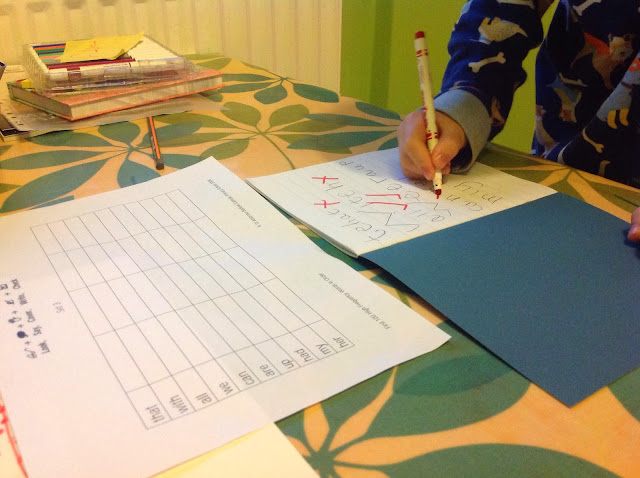 While Harry did this, Peter sat with us and did his letter activity. Peter was learning the letter 'P' last week and this week we are looking at the letter 'S'. I drew a chalk letter for him on black card and asked him to make a letter constellation by sticking star stickers around the lines. This idea was from No Time for Flashcards, which has some great activities for young children. We traced the letter with his finger a few times when he had done it and he stayed at the table drawing with a pen for ten minutes too. He almost achieved a likeness of a face, which he was very pleased with. 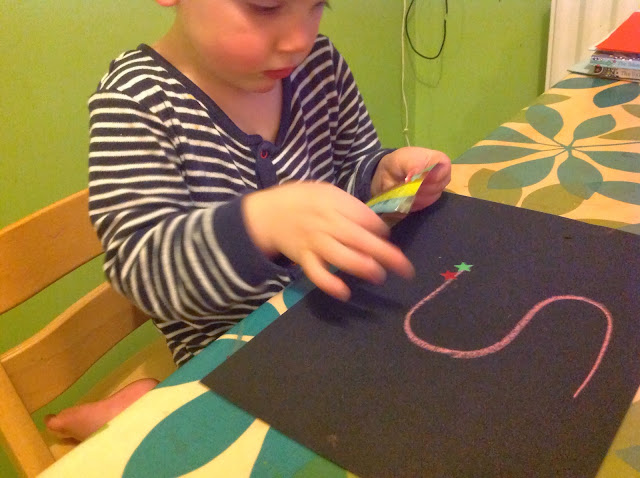 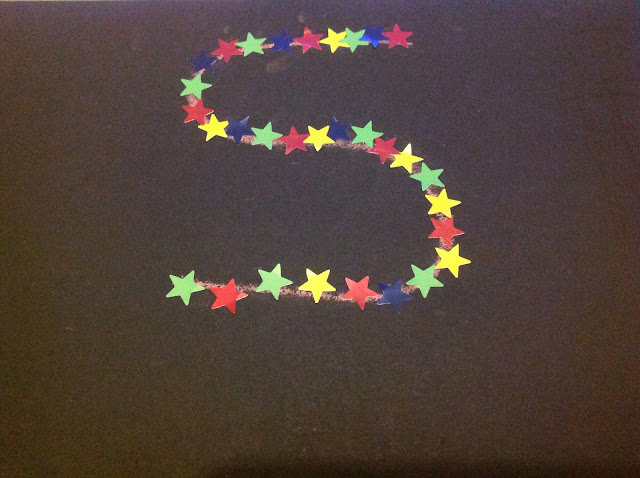 We also spent half an hour talking about ideas for our group story, which is part of our Tuesday home education group session. We will share this next week and another family will take the story home to continue it. Harry came up with ideas for where the story should be set, how the Silver Hook came into being and some characters and I wrote them down. We have just made notes for now and will add some descriptive detail another day.

Following the BBC schools radio programme we used at our group yesterday, I looked through the website and played one of the podcasts called Playtime from the early learning section, which included the rhyme, The North Wind Doth Blow and asked you to do various movements pretending to be a robin in the snow. They both listened and took part in this, so I will be looking for more we can use from this website as it's fun for them both and good for speaking and listening skills. I noticed that a podcast series of Wind in the Willows starts soon so we may listen to this, as it's one of my favourites.

The boys carried on drawing and completing Lego sticker books at the table after this. Stuart and I have just agreed that we need to buy a bigger table for the kitchen and I am very excited by this! Harry no longer has the table to himself and there is not enough room for all their books and craft supplies to spread out. It will be a bit of a squeeze for space but I think it will make a big difference as I expect to spend more time doing table based activities now that Peter wants to do this too.

Harry received some maths based board games for Christmas and we enjoyed playing them today. I love maths games - Harry seems to learn really well by playing and they are fun too. Magic Cauldron is a game from Orchard Toys in which you choose a cauldron ingredient, which shows a number, then find the correct sum to make the answer. Trilemma is a game where the cards each have three questions so you can choose the appropriate ability level. The aim is to place three counters in a row on the board to win. We played the correct way and also played by taking turns to ask each other questions for five minutes to see how many counters we could place on the board. 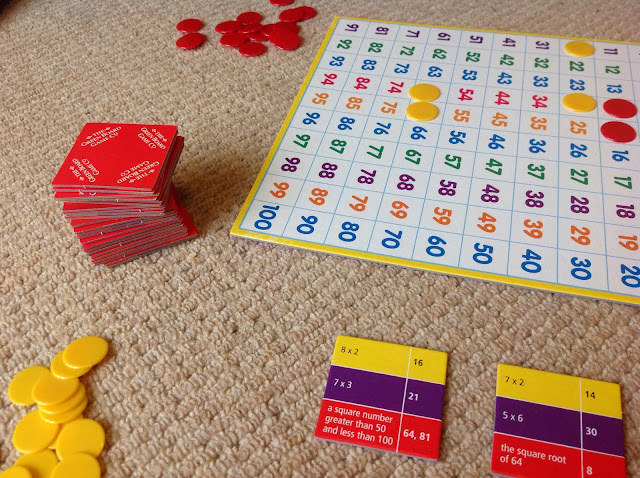 Peter pottered around us playing with Lego during this but we also played Alphabet Lotto and Insy Winsey Spider with him too. He is getting really good at recognising the numbers on dice now.

After lunch, Peter was looking really tired so we all went upstairs to sit under duvets together and listen to audiobooks. Harry has started The Last Battle so he was keen to do this. He listened with headphones while I listened to Thomas the Tank Engine stories with Peter. We had a date to call my mum after tea today so Peter had his bath after half an hour of listening (which is about his limit for wriggle-free sitting!) while Harry continued to listen. They swapped over and Peter played with the train track in their bedroom while Harry had his bath.

This afternoon we have played catch and piggy-in-the-middle with our soft Ikea football (this is great for indoor physical activity!), finished reading Mr Gum and the Cherry Tree and Harry has started his next Oxford Reading Tree book, Save Pudding Wood. He read half of it today with no problems. I put some Alphablocks episodes on TV while I cleaned, which included the letter 'S' for Peter.

We called my mum using FaceTime after tea and Harry practised his cello with Stuart when he arrived home. I am pleased that we have achieved everything I wanted to today and have all had a chance to relax too. We are ready for the rest of the week now, which includes home education French class tomorrow, enjoy-a-ball class on Friday, cello on Saturday, then an exciting early birthday celebration with family for Peter on Sunday! I had better start thinking about cake designs.
Posted by Hayley at 22:09